Is it better to live alone than to have someone who enters your life and possibly hurt you? A person with a wounded heart, like a bird with a broken wing, feels this way about love, and is wary of letting someone in to mend it. Film Rattapoom sings about this for the lakorn, The Cunning Love (Paen Rai Phai Rak), but I wonder if he is singing about the leading lady Kemmik, who has clearly been hurt several times over, or is he singing about his character Pisang, who hasn’t quite divulged his broken hearted history?

In this week’s episodes, we learn that Kemmik has decided to pursue the new “job” for money, for the sake of saving her world in essence, and is set to make Mr. Pisang fall in love with her, then fall out of love with her so much so, he will leave the farm in his own accord. After all, 5 million baht is on the line here, her mother’s well-being is at stake, and her career as we know it is at the whim of the airline President. She is hoping to do this in 3 months, after all, she seems to break people up in a matter of a date. How hard could it be to gain the upper hand and make Mr. Pisang fall in love with her?

Hard. Mr. Pisang isn’t like the rest of the stupid, cheating men she is accustomed to. He is immune to her female wiles, her cunning tricks. Because he doesn’t trust her. The set up for her to conveniently be the lawyer’s long lost niece is simply that- a convenient excuse- and her reasoning that she needs to learn the ways of the farming life so she could eventually help her farmer fiancé in Denmark, reeks of fabrication. So you couldn’t blame Mr. Pisang for suspecting her of ulterior motives.

What Kemmik and his mother do not understand is that Mr. Pisang is taking this farming endeavor quite seriously. He has made a promise to his grandfather that he would watch over the farm in his stead- since his own father’s interest lies solely in the airline business- which means, Mr. Pisang has no intentions on helping with the family business in BKK and doubly no interest in falling for anyone, hot or otherwise. So Mr. Pisang’s character, his motives and desire are completely understandable to me. I really like this guy and I totally feel for him when Kemmik does something completely unreasonable and he must question her character.

Now our hot mess of a leading lady is showing severe signs of being irrational. There are moments when her character is real, her heartbreak, her messed up life. But there are times her character becomes irritating and you wonder if she has her head screwed on straight. I understand that most of the irrational behaviors come from the director wanting to crack a joke, but dang, do it reasonably. Take for example in episode 4, when she assumes Mr. Pisang is doing perverted things to a pig. I mean, he runs a flipping pig farm, what does she hope he was doing? Raising them as pets? He is in the process of insemination and her hijack response killed his hard work. Apparently it is a big deal. Then her friend decides to accompany her to the farm and fails to even ask for permission from the owner. To me, unwanted guests are like ants. They are just pesky and annoying. Also, her friend doesn’t even volunteer to help out! What, just going to chillax for free? Oy vey. And lastly, the shrieking’s have got to stop. Kemmik, her BFF and Namwan are all guilty of it.

But thankfully, towards the end of episode 4, Kemmik realizes that in order to win him over, she cannot rely on her feminine wiles. Being sexy, overacting, and irritating isn’t going to win this one over. She needs to up her game by proving to him that she can survive on the farm. I like that the message is clear, that Mr. Pisang isn’t like the rest of the lowly male population, and that to attract him is to gain his respect.

There are some laugh out loud moments that doesn’t pertain to her being irritating or overreacting. The moments where Mr. Pisang realizes that she makes him smile unknowingly, or their teasing banters where she flirts with him, keeps me invested in this drama. Because not only do I want to see how this manipulation pans out, but I want to see the revelation behind their shared past.

Kemmik used to fall for a man back in her study abroad. He took her innocence. Back when she used to be fat and ugly. We are not privy to the identity of said man, but there are clues that perhaps that man is Mr. Pisang himself. He names his pet pig “Pooklook” which is the same name her lover used to call her. Apparently she is heartbroken over him, and vows to become beautiful so she could test the rest of the male population. We are not given the details of why that had happened, as far as Mr. Pisang goes, so that tidbit of mystery keeps me interested. Not to mention the chemistry and easy banter between Matt and Film.

As far as which of the two is winning in this match (over my adoration of course), it’s Film: 1 and Matt:0. Perhaps when Matt continues with her natural funny side (which makes me literally laugh out loud when she tries to make Mr. Pisang smile) and acts more like the desperate girl who’s trying to hold on to the pieces of her life together, then maybe she’ll win the next round. But for now, I feel for Mr. Pisang. 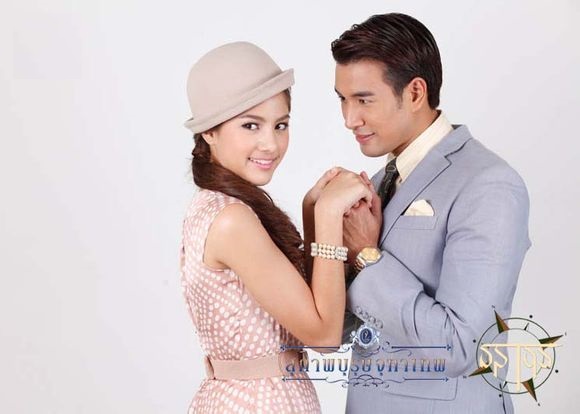 I typically like P’Num Krit’s direction. He does a good job with my past favorites- perhaps this falls more on the storyline- but Khun Chai Tharatorn is severely losing my interest. When I watched this past weekend’s three episodes (and fast forwarding the majority of the scenes) I couldn’t help but think to myself, when is the next part airing? Especially, when can I see Khun Chai Pat’s story? I know, that is horrible of me. There’s nothing hugely wrong with the plot or characters, I just find it so boring. I haven’t been a huge fan of Great, and it isn’t going to start now apparently. There is something about his forearms. But more for you to spazz right? So, I’ll finish at least watching the series (with lots of FF’ing) and look forward to the next part about Khun Chai Ruj.

But such in lakorns, there are highs and lows.