A new Prince Charming is in town, Por Liang (wealthy man) Pong In is the most desired eligible bachelor in Chiang Mai. He’s caught the attention of Viyada, along with his very own distant relative who wage war to garner his attention. However Por Liang only has his heart set for Maenwat, a young socialite with blood ties to the royalties. Maenwat has a controlling mother who wants her to learn how to be a gentle lady so she enrolls her daughter in the ladies culinary school on weekends. There she meets our very own Bpie who has been taking these lessons in order to be the best maid she can be. Bpie and Maenwat become instant friends and they develop a natural bond as Bpie teaches Maenwat how to carve fruits and vegetables.

At the end of class, Maenwat uses Bpie as an excuse to play hooky from home. Turns out, she wanted to spend some time with Por Liang, her boyfriend. Bpie gets introduced to the happy go lucky Por Liang and knows that these two are in love. Por Liang, although is charming to so many ladies, he is quite committed to Maenwat and wants to ask for her hand in marriage after she graduates. But Maenwat could only look away with fear, as we find out later that mom doesn’t approve of Por Liang, deeming the man a womanizer and won’t take her daughter seriously. Maenwat is scheduled to go study abroad with her big brother the following week.

Devastated that she has to study abroad so soon, Maenwat seeks out Por Liang at his home to share with him the news. But Por Liang is throwing a party and entertaining his friends, and had no idea that Maenwat walked in on him when his distant relative tries to throw herself on him, and then Viyada was wreaking havoc at the same time because she had wanted to be the one to throw herself on him. Poor guy. So Maenwat walks out of his house heartbroken and in tears. By the time she reaches her home, she reports to mom that she will indeed study abroad. Why she doesn’t confront him while all of that took place, I don’t know. She just took what she saw as the truth and walked away.

Bpie and Monthai are still penpals, even though the time between each letter gets a little longer due to Monthai’s work load. But Bpie finally learns what “you are the apple of my eyes” mean and she could no more stop herself from corresponding to his letter than she could stop eating. She knows that Viyada means a lot to him and would be devastated if he learns that she no longer feels the same way. We have come to know that it has been seven years since his departure, and Viyada wants nothing to do with him. Bpie tries to tell Viyada that Monthai is true to her, hoping that Viyada would change her mind, but Wan (second sister) finds out that Bpie had been replying to Monthai’s letter all this time and questions what Bpie was hoping to expect when Monthai returns home. Wouldn’t he be devastated when he finds out that Viyada forgot about him and have already moved on to the next best thing? 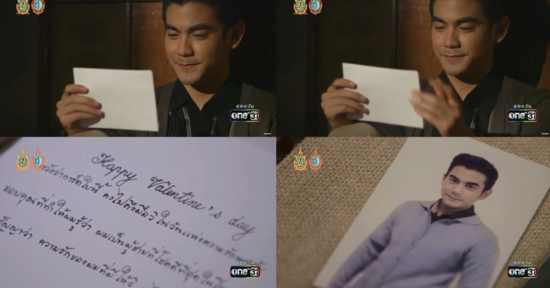 Naively Bpie thinks that once Viyada sees Monthai again, she would change her mind. She’s convinced that Monthai is the best man there is and no woman would be disappointed to have him. Wan lets it go and tells Bpie to do whatever she wants, just don’t let Viyada find out. We don’t know her angle on this, just that she despises her sister.

Khun Ying Tuptim is literally losing her mind over her son’s neglect. She drives all of the maids away from the manor, and what is left is skeleton staff at home. At wits end, Housekeeper Jiem requests to see Viyada because she thinks Viyada is the only person that could make Monthai come home. However Viyada refuses to go, and then gets a bright idea to send Bpie in her place.

I could use less of the sister’s catfighting in this episode, but I understand that it serves to show how much the younger sister resents her older sister, and why she has agreed to keep things silent about Bpie’s penpaling with Monthai. It’ll be interesting to see Bpie tending to Khun Ying and being the potential glue that will put mother and son relationship back together.

But Monthai, he’s got the shorter end of the stick. It’s not going to be pretty when he comes home – learning that the love of his life – better yet, the apple of his eye – actually is well over him and has moved on, while the person who has actually been penning those letters and knitting him sweaters, is tending to the mother he no longer wants to see. But dang, Monthai is pretty cut and dry, do you really go away for seven years with not even a visit to the one you love? Do you seriously expect a girl to wait that long for you, without even seeing your face? I mean it’s not like they have skype or snapchat, or even facebook, how do you not die from missing someone so much? That is one LONG ass distant relationship that I would never have the patience for. Either fly me there to be with you or we’re over. Ultimatum. So in a sense, I can see why Viyada ended things with him. Bpie’s professing to wait for him is really just to keep his spirits up and to spare him any heartbreak at the time, but it’s not like he’s coming back for HER and it’s not like she could spare his pain forever.