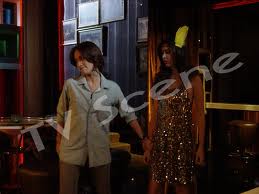 I think I’m in love with Ploy, in the non traditional variety. I’ve never seen her act this way, charming, funny, beautiful all rolled into one as she dominates episode two. We now know that Priew (Aum) has turned into Pim Mala (Ploy) and must obey Angel Rumpa’s orders or do as she bids in order to redeem himself, literally. We see that Pim Mala couldn’t accept it at first and constantly tries to turn herself into a man again. However, she discovers that her dad is in the hospital and she needed to make sure she can be herself again- that is, himself again for his father. (Trying to be gender correct is terribly difficult when we’re in this situation.)So her first task is to help Da see the true side of Dton, the man who is currently dating her. Da is also the woman who wanted to throw herself off the building because she couldn’t accept that Priew had played her- funny how she got herself into the same situation again. I almost agreed with Priew in that she is totally asking for it.. but men can be misleading too. If Pim Mala accomplishes this task, she will be able to be a man for an hour. Priew decided to take what he can get, so he created a plan to open Da’s eyes, so to speak. The method is not important, what is truly of the essence is what happened after that- both Ploy and Aum were soo amazing that I became teary-eyed. Priew (keep in mind that she’s seeing Pim Mala) told Da that there are two things that she must understand, one is that she must have more than beauty and ability, she should be able to be a partner with her man. Second, she needed to see the value in herself. It sounds like Priew has learned something. So he gets his hour but not too long…

After discovering that his dad is well and has left the hospital, Priew’s next option is to visit a club with working girls. Apparently a bad choice because angel Rumpa catches his drift and turns him back into Pim Mala, another funny scene. Will Priew ever learn his lesson? The moment we are sure, we are mistaken 🙂

The angel we have here is not your average, ordinary angel. She’s beautiful yes, but she is also at some point immature (sticks her tongue out at Priew) likes to play dress up (guy’s dream come true!) as well as being very meddlesome. But it is enjoyable to watch the dynamic between Priew and Rumpa and Pim and Rumpa. I truly adore Ploy as Pim Mala, especially when she defends herself, causes an uproar with people at work  and shows who’s the boss! As well as seeing men (even Namnuan’s uncle) try to flirt with her. Hysterical!

I’m excited that we’ll be seeing more of Ploy as Pim and Aum as Priew!