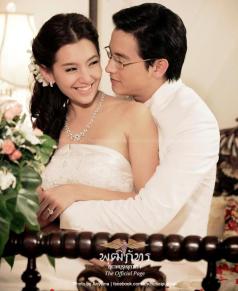 In hindsight, the powers that be (channel 3 elders that is) are probably kicking themselves right now. They knew that the weekend prime time lakorn, Khun Chai Puttipat, is in the hands of Paajaew, a more than capable director. They also knew that the storyline and script will appeal to the general public; it is after all based off of a book series, and had been received pretty successfully. But they had no idea that the combination of the aforementioned, along with a budding actor and his chemistry with his costar, could culminate into something so irresistible. It is too late to request an extension, too late to supply the demand.

But that is one of the reasons why I like Channel 3, and why I think this particular lakorn is so darn cute. Perhaps they knew all along that they have something special on their hands, but unlike channel 7, they don’t always air it before the lakorn has finished filming nor will they extend it just for ratings or air time. Channel 3 in this effect, has fueled the fire (and fever) for a character (Khun Chai Puttipat) and his actor (James Jirayu) to fans who can’t seem to get enough.

Previously it is easy to admire Krong Kaew Bunmi, because the story focused on her struggles, however as the story progressed, all attention lies solely on Khun Chai Puttipat, and his call for action. Allow me to elaborate. Khun Chai Mor, unbeknownst to him, has been understood as a man who isn’t capable of love. He is pretty straight laced, direct, and cold to ladies around him. But the proverbial love is his character arc, a pretty magical transformation to a stoic gentleman who would rather spend his time in the surgery room. The unemotional, unfeeling doctor blossomed into a mushy romantic, who is shocked to find his family and friend’s exasperated of his out of character behavior. That my friends, is my most favorite part of this show. Khun Chai Pat would look at his friend Dr. Yossawin as if he grew a second head, “what, you didn’t know?” after he told his friend that yes, he loves Krong Kaew. Then he would peer at his grandmothers with defeat and explain that he contrived for Krong Kaew to marry him, because he deeply loves her, but it is unrequited. Where did this man come from? Lol.

His hell bent, stubborn and righteous attitude is a pleasure to witness. No one or thing could stand in his way if he puts his mind to something. Perhaps that is why he is such a brilliant doctor. Even during the most uncertain of times- such as the time he had to guarantee his skills while delivering a baby in a rural home- or during the most certain of times, when he had to stand up to his grandmothers about the very essence of being a gentleman. His grandmothers raised him to be a protector of what is right, a champion of the weak, and a challenger to the authority. He could not stand by and watch a damsel in distress. As his grandmothers, how could you argue with that? It goes against his character grain to sit by and watch, the very thing the grandmothers had originally advised him to do. And to that effect, how could you not love this man, this Khun Chai?

Another recurring theme that has been woven throughout this drama is the essence of a gentlemen or gentle people. The characters who fail to exude these qualities, suffer because of it, and for those that deep down possess these qualities and later remember it, are inevitably forgiven. Take Tan Pinit for example, he prides himself for being a gentleman. His actions aren’t all that gentlemanly per se, but he truly believes that he can offer and pleasure any woman. He thinks that any woman could be purchased and lured with money. All of the women in his life are claimed that way. But he soon learns that his power and money cannot buy everything, when he meets Krong Kaew, a woman who values her dignity above all else. She would rather die than to be his mistress. It’s a sobering effect, an emasculating concept. And his true gentleman quality emerges as he would not force himself on a woman who isn’t willing, much less on a woman who belongs to another. He also discovers that he has his own true gem all along- his wife. So when he removes himself from being Krong Kaew’s admirer, and feels remorse for his actions, he too is able to redeem himself- further exemplifying that being good- being a true gentleman can and will be forgiven. On the other hand, Kraai, the son of a scout, who is beyond redemption and has no ounce of being a gentleman, is running for his life after attempting to kill Khun Chai. Although certain things in life are black and white, there are gray areas that play in the dynamics of this lakorn as well.

This weekend’s episodes closed out the conflict of Tan Pinit as well as our grandmothers who must accept their grandson’s decision, otherwise they risk losing him from their lives. There is only a couple of lose strings to tie up, Khun Chai Pat’s proposal to Krong Kaew and Marathee’s final hurrah to eliminate Krong Kaew once and for all.

Removing yourself from being a fangirl for a moment and putting your feet in Krong Kaew’s shoes- which is hard because hello, it’s so easy to fall in love with Khun Chai Pat- but we will be able to better understand her cause for concerns of her suitability for Chai Pat. At its simplest bare bones, this is a story about class. Krong Kaew is a realist and one with a grand dignity as well. She knows that outside of their “relationship” they have to consider others as well, their family and friends, the judgey society. She also has a strong knack for desiring to build herself, proving to herself that she has something to offer to someone. Krong Kaew believes that she relies so much on Khun Chai Pat, but one day, what if that changes? What if he can no longer (or unwilling) to provide the things he used to provide for her? Deep down she is terrified; she believes a relationship must have a giver and a taker. She has been doing all of the taking. And she doesn’t think or perhaps isn’t confident that true love surpasses all. And this is when Chai Pat will come in, he must make her realize that she has given him more than he’ll ever need: love. I know, I am such a sappy romantic! But it’s so true in this elegantly scripted lakorn. He must make her understand- because this time words are equally important as actions- and Chai Pat will have to take out all of his aces to convince Krong Kaew that they are meant to be together.

And I am so stoked for the finale, the final moment of truth where Chai Pat declares his love to Krong Kaew. Yeah, I’ve been drinking too much of this Kool-Aid. Clearly any fangirl of Khun Chai Puttipat is regretting to see this lakorn end so soon, I mean 10 episodes, that’s like having so much fun at the bar and getting cut off. What do you mean it is last call? Can’t this lakorn go on and on? But there is a silver lining after all, we’ll see them do a real smooch in Ronnapee’s story, and hopefully see more of their cameos in the two Gents series to follow.

So way to go author of the novel, the lakorn production team, channel 3, Paajaew, and most importantly, Nong James Jirayu and Bella Ranee- you have made this lakorn simply irresistible. 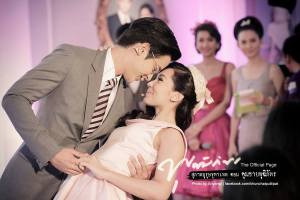 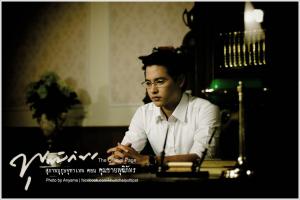