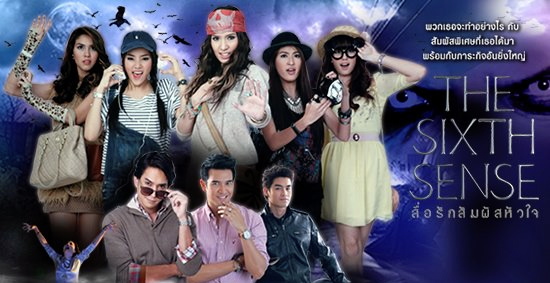 I am intrigued by the introduction of new actresses, underrated leading actors and the fascinating premise behind sixth sense. I love me a good scary lakorn with the backdrop of white/black magic, ghosts, spirits and romances strung together due to supernatural conflicts. And hello, there’s Louis Scott! But more about him later.

The ability to perceive the unseen world, which is known as sixth sense, is achieved through the five subtle senses of smell, taste, sight, sound and touch. In our latest weekend lakorn, the story explores this spiritual world through five female characters that possess these abilities with an added flair: Yanin can communicate with the other dimension by transporting her spirit to their medium via meditation; Rod not only has the sense of smell, but she possesses white magic; Ned has the ability of sight; Kat can see people’s past through touch; and Kan has the gift of sound.

If you can imagine, their gifted abilities can sometimes be a curse. They realize early on that they cannot live like normal people. They can’t hold a normal job without looking like freaks and it is practically impossible to relate to their fellow coworkers. God knows they have tried, but the other dimension (ghosts and spirits) constantly surrounds them. So the five girls (we don’t really know how they found each other, just that they are good friends when we meet them) join forces and open an interior designing business in hopes that at least they can be normal within their abnormal world.

The theme of using sixth sense for the good is woven in this lakorn, but we are also given the darker side of this ability, that if possessed by selfish, materialistic people, it can be exploited and used for evil deeds. The five leading ladies face many challenges: fighting black magic, ghosts from the unseen world, trying to make a living and at the same time, battling the will of non believers.

It has been said that females are more intuitive and thus sixth sense comes more natural to them, whereas males steer towards the rational side. This is displayed through the male lead characters that don’t believe in the unseen world: we have Grate as “A-thee-noi” (I forget his given name), Louis Scott as Tin, and Phet Takrit as a pathologist (a doctor who examines cadavers.)

As in any lakorns, whether the genre is action, horror or drama, I always anticipate the romance aspect of it. And I must say, the pairing of Louis Scott with the character Yanin is my favorite couple so far. Mostly due to Louis: he plays Tin, the “farang” (foreigner) from America who returned to his ancestral land to build a resort. His grandfather is rumored to be a cheater and traitor- but a very wealthy one at that. Tin tells everyone that he doesn’t care about the past; his goal is to build a resort. Unfortunately, it is becoming seemingly impossible to finish this task. One by one, his contractors fled the land due to encounters with mean ghosts. He grabs on the last string of hope when his friend Nat, a police officer, recommends his younger sister’s company.

Yanin thought Tin was beautiful on first encounter, and who could blame her? She was even sad at the prospect that he already has a girlfriend (Penny- even though technically they’ve only been dating for two months) so she tried to appear uninterested and that she disliked him. Which is a stupid and contrive way to create conflict among two people. Yanin seemed to be controlled by her emotions than her rational mind, which worries me because she’s a businesswoman. I mean, she runs the interior design shop and has to be constantly reminded (by her bff) that a customer is always right (customer is god.) Seeing that they are desperate for money because they don’t even have enough to pay for the utilities bill- then for her to act all high and mighty- is a little bizarre.

I just adore watching Louis Scott play the arrogant, somewhat clueless farang who speaks Thai-glish (he mixes Thai and English.) He is the source of humor in this lakorn, watching him struggle with the language and making embarrassing errors totally made me laugh, and I love to laugh.

What I notice between his character and Grate’s is that they are disinclined to believe in the other dimension; Grate more so than Louis, maybe that is why I like Louis’ character better. He has a desire to build his resort and will do anything necessary to achieve it. He has a sense of purpose and is directly responsible in hiring a company ran by someone whom he finds a little beguiling but interesting. While Grate is also educated from abroad, and finds the spiritual world nonsensical, he is trying to steer his family (who are believers) away from the schemers. There’s not a lot of information about the third leading guy yet, we just know that he is not on good terms with Nat (the police officer) who mistakens him for stealing his girlfriend in the past. As for the remaining ladies, I don’t know if they will have their Mr.Right, but maybe that’s not necessary because the two girls always bicker at each other and serve as a couple, lol.

The girls took some time to grow on me. At first (especially when they’re together) they sounded whiny and annoying. Once the story started to roll and the female characters were given personality and storyline, I don’t mind them all too much.

All in all, I like it so far. Enough to keep going.

—
I’m watching this series (up to ep 2 so far) on Tost78 channel on YT. Unfortunately, no idea if it’s getting e-subbed, if you do know, please share with the readers!