It’s Wednesday night and probably until Sunday, I am out of lakorns to watch. Sad, but true. Good lakorns are slim pickings these days and I should be happy Hong Sabat Lai was pleasantly surprising, but it only keeps me occupied from Monday to Tuesday.

To make matters worst, the list of lakorns I’m anticipating to watch, Qi Pao, Punyachon and Nuer Mek2, probably won’t air until the end of the year- which leaves lakorns like Rang Pratana, Maya Tawan and Dao Ruerng (which are currently still being filmed) to air perhaps next year.

So I decided to continue where I left off for Prik Gup Kleur and seriously had a lol moment with a scene in episode 4. It was a classic, slap kiss scene that I simply must share.

Jid, our hi-so snob is keeping a close eye on Ding, a new mechanic at her dad’s company, Modern Car. She’s suspicious of his every move, because one, she doesn’t trust him and two, he dare to contradict her. She had discovered him secretly chatting with their competitor’s wife and Jid surmised they were contriving to take down Modern Car- her dad had a close call earlier with some motorcycle miscreants. What she failed to realize is that Ding had helped her father earlier from those miscreants, why would he plan something else against them? She sees what she wants to see.

It turns out however, that Ding and the competitor’s wife were former boyfriend-girlfriends and she was lying to him that his father had raped her and forced her to marry him. She couldn’t shame her parents so she agreed to marry his father. So Ding is conflicted, should he believe his beloved girlfriend or his father? He sort of believes her at first because of her female wiles- but she is merely a lying, greedy bitch. And now that she’s married to a rich man, she’s trying to tear the family apart so she could get a bigger chunk of the inheritance and all the while still keep Ding to herself.

There’s more greed where that came from. Taywan, which is Jid’s boyfriend, has also contrived to gain the company from under her father’s control. What’s worst is that he’s cheating on her with one of her friends. Ding actually learns of this when he caught Taywan and the female friend messing around. Fortunately Jid is surrounded by a couple of good people, her two best friends who had a notion that Taywan was straying but wasn’t sure how to relay that to Jid.

When they finally did, Jid, wearing her anger on her sleeves, confronted Taywan about his side action. He refused it of course- but that’s not the whole point.

The point is that, fast-forward to present time, Jid is being used as the one with the “side action” lol.

She felt responsible for Ding being in the hospital and hurt and all. So she played nice, trying to make it up to him. He used her goodwill to his advantage and told her to buy some fresh strawberries for him.

She proceeded to the shop in the hospital, but as she paid for the strawberries, Si (the greedy bitch) was also there visiting her husband. She was curious why Jid was at the hospital and decided to approach her. But Jid only thought about how she had noticed Ding suspiciously talking to See the other day and wanted to see that if they were in the same room under her watchful eyes, what would they talk about? What could she glean from their “platonic” relationship?

So Jid brought See to Ding’s hospital room, which placed Ding in an awkward situation because he had just learned the truth about Si- that she had been lying to him and his father. Now he had to pretend like he didn’t know anything- while the troublemaker Jid, was watching his every move!

Jid tried to break the ice and invite everyone to eat the strawberries she just purchased, chattering on about how Si and Ding are old friends and must have so much to catch up on. She hoped they didn’t mind that she was joining them.

As she continued on her diatribe, Ding figured out how he would handle the situation. He grabbed Jid’s hand, which was waggling in front of his face with the strawberry- and brought the fruit to his lips, taking a big bite of the juicy fruit. Jid was too shocked to react, tongue tied by his actions. He told her that it was so sweet (calling her “tee-rak” (my dear)).

Jid realized it was a mistake to sit on the hospital bed with him- he was mad- after flirting with her he told Si that Jid was such a bad girl, she had a boyfriend but she was messing around with him- lol! Just when she had accused her boyfriend for straying!

Flabbergasted she wanted to say “don’t believe him!” but she found the butt of the strawberry that he recently bit on, pushed into her mouth- haha! She was forced to bite before it choked her.

Si believed this, because after all, to her, Jid was a bitch. She was capable of anything. Ding was hers! She won’t let them be an item- side action or not!

Angry, Si stood up to leave- while Jid tried to tell her something- but Ding grabbed Jid by the waist to stop her- which pissed Si off even more, haha. Apparently Jid is struck with speechlessness.

By the time Si left the room, Jid had worked herself up into a rage. Ding released her waist with a smile and Jid turned around and slapped him across the face.

He could feel the heat radiating on his cheek and angrily said, “Two can play this game!” He grabbed her face and pulled her in for a smothering kiss.

Jid pulled away and glared at him. Then she stormed out of the room in a fit of anger- oh and was that a blush too?!

If anything, this lakorn had me at the laugh out loud scene, and I’ll keep watching it until it forces me to stab my eyes out. I hope we get to see more slaps/kisses scenes lol because I know that if anyone, Ding will not let Jid walk all over him. One thing is for sure; Pancake and Vee are quite an item. As for the other stuff in this lakorn, well, that’s just elevator music.

And some island scenes to look forward to? Wah… narak aa!! I need to get there soon.. 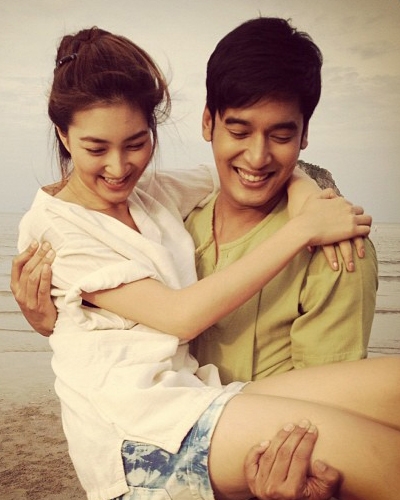 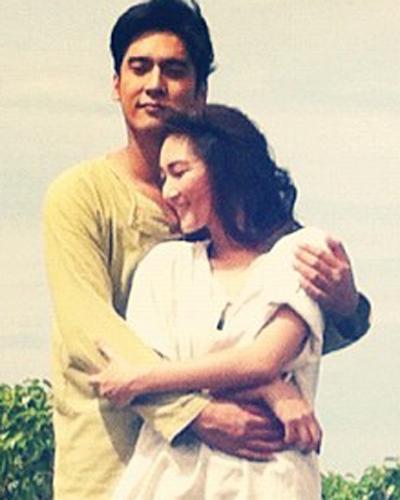