When watching Love Never Dies, one must put aside expectations and focus on the one key factor that the director does so well: pairing real life ex lovers as onscreen beaus. It is daring, risky but ultimately brilliant. The attraction for Love Never Dies lies solely on the chemistry between Traipoom, the 400 yr old blood drinking man and Plaichat, his young fearless employee, whose characters are played by the renowned Dome Pakorn Lum and his former girlfriend Ploy Chermarn Boonyasak. Preferring to think of this drama as a romance drama first, then setting in the backdrop of blood sucking vampires second, my plot-induced mind can make way for my romantic heart. Because trust me, you’ll be able to enjoy it so much more. 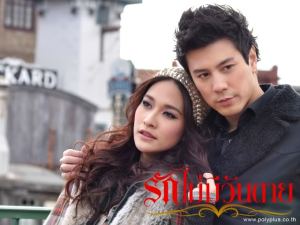 Set in modern day Thailand, Traipoom is determined to honor his dead father’s request by finding 117 Ming dynasty antiques and returning them to its original spot, upon which, the 400 yr old curse of immortality and drinking red internal bodily fluid will end. The conflict of the story involves Traipoom’s fellow blood sucking vampires and his extended family members who rather enjoy their immortality, thank you very much, and will do everything in their power to stop him. Traipoom finds help in locating the remaining 7 items with Plaichat, a young and fearless mortal, who specializes in the discovery and preservation of antiques. Unexpectedly on their journey to discover these antique treasures, Traipoom and Plaichat discover something much more dear: love.

The theme of their love is one of selfless, support, and giving, very much in connection to their character’s personality and traits. Traipoom is a strict gentleman; he is wise, generous, confident and sure of himself. He despises drinking blood in order to survive and prefers to keep to himself. But most importantly, he is afraid to love anyone for fear of outliving them. He believes that watching the people he cares about being buried before his eyes is hard enough as it is, but to love and to lose someone would be unbearable. He does not wish his eternal life on anyone. Then comes Plaichat, who is the polar opposite: she is vibrant, lively, and clumsy and wears her heart on her sleeves. She prefers to talk to fill in the void and enjoys spending her time reviving and showcasing antiques. When brought together, they truly supplement each other.

Love Never Dies is a lesson attempted to weave throughout this lakorn. Traipoom learns that the feeling of truly loving someone does not die when the person dies. Plaichat discovers that when in the presence of one she loves, she will live like there’s no tomorrow. All profound themes in theory, however in development, not so astounding. The plot itself does not inspire profound discoveries; we have vampire showdown with fangs baring, lame subplots- with even lamer plot resolution- and some useless characters. I am also thoroughly disappointed by the idea behind the ending, although I am thrilled for their happily ever after. With that being said, what we can take away from their love story is their blind faith in each other, their brief couple’s dispute (as in one), and the readiness to go to bat for each other. To me, that is the most attractive part of the storyline.

And then there’s Dome. It would be stupid to talk about Love Never Dies and not talk about Dome’s hotness. Apparently I’m not alone in fangirling this particularly hot (or J’s term hothothot) male specimen. Dome as Traipoom is buzzing all over Thailand and other parts of the world, especially how fans want him to bite them. It is not possible to watch any one of his scenes and not drool, young, old and gay alike. Which perhaps aid in overlooking the simple fact that this is his debut drama and his acting still requires some work. It is a good thing indeed that he’s portraying a vampire- one that is brooding, emotionless and stiff.

So if you like to ogle the main guy- as well as several handsome vampires (there are hordes of them)- enjoy an almost ideal relationship between the pra’nangs, see their sparks fly, and participate in many screech worthy scenes, then this lakorn is for you. As for me, if Traipoom keeps checking up on Plai to make sure she is alright, looking at her so directly like he wants to have her for breakfast, carrying her in his arms, and being such a gentle, trustworthy pr’ek, I’m going to die. And to reserve the three little words and a delicious hug and kiss for the end. *Swoon*