The beginning of madness? 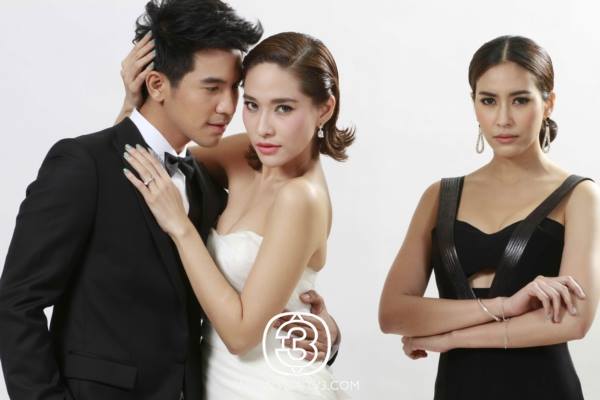 We all have our fair share of baggage when going into a relationship, some more than others. Especially Karat (Ploy Chermarn) who had been widowed twice with no good for nothing husbands who only saw her for her money. She didn’t quite lose hope for love though, as she married her third husband, thanks to her best friend, Sai Nampeung (Jui Warrattaya) who introduced them. Aw. But Karat’s cycle of bad news bear didn’t end there. Her third husband turned out to be a lying, cheating scumbag too, and it propelled Karat to believe that maybe all men are like that. From the opening scene, we know that Karat will give as good as she gets. Nobody messes with her. She has a few bitch slaps to prove it too.

Upon a car accident, her third husband drove himself to death rushing to meet her at their anniversary photoshoot. But that day she lost more than her husband, she lost her best friend too. Not in the literal sense, because Peung is very much alive, but Karat discovered that her best friend had been sleeping with her husband all this time. The greatest betrayal of all. But Peung who appeared to have animosity towards Karat (even though they were ‘best friends’) retorted that Peung had met Poo (the dead husband) first and he only married Karat for her fortune so that he could divorce her later to be with Peung. Worse friend ever. Worse blow ever.

It doesn’t help that Karat has a broken family- her two sisters are fantastic though- but her mother deals with the same issues as Karat- she believes that she has a cheating husband and is obsessive about making his life miserable for it. Methinks Karat should have a good look at her mom, because if she doesn’t change, she may just end up as bitter in the end. Mom’s motto in life is that money buys happiness. You can have enough money to buy a husband. Apparently that’s true, but your husband would only end up using you and cheating on you, but I digress.

Then enters Pisut or Khun Chai (Pope Thanawat.) Pisut is a nobleman (just like his character in Khun Chai Pawaronruj) his father is of noble descent while his mother is a dara (star.) This is a stigma against his mother who is of lowly descent and to make matters worse, has rumors swarming her about being a mistress (to Karat’s father no less.) Pisut is not bothered by this, he’s quite happy with his simple life with his mother and he knows his mother is a good person. He’s a professor and volunteers with different charity events to help kids in need. During his seminar in Pattaya, he meets the reknown “Karat”, sassy, beautiful and.. rather sad. He witnessed her life unraveling before his eyes: the death of her husband, her backstabbing best friend, and finally, her meltdown. Through coincidences (or is that fate?) he plays her knight in shining armor.

What is attractive about Pisut, other than his calm and steely exterior, is his compassion and cleverness. The total opposite of Karat, who is fiery and explosive. But according to her older sister, the one who plays the role of a mother hen (since their mother is too busy finding fault with their father), Karat may appear to be strong on the outside, but she’s delicate and sensitive on the inside. She wants to be loved and gives her love, but only to have her heart crushed and handed back to her. After meeting Pisut many times over and finding him meddling with her attempts to hurt herself, Karat feels connected to him. She’s attracted to his kindness, generosity.. even though he’s convinced he’s not attracted to her whatsoever. Right.

The central theme in this story is trust. Karat constantly loses her ability to trust people and through meeting Pisut (Pope Thanawat) will she learn to trust again by starting a new baggage with him, or will she open her past baggage and let it ruin her relationship? It’s a surprise Karat hasn’t gone mad already (with her experience and disposition) because what has happened to her in a matter of a day, is really just the beginning. Peung blames Karat with the fact that she no longer has a future with Poo. She’s pregnant with his child and she vows that Karat would experience what she’s going through. Despite learning from Poo’s mother that she’s just another ‘wife,’ just another conquest, because Poo apparently has signed a fake marriage certificate with many woman, and promising them that he would divorce his wife and be with them. Jui does a good job conveying the kind, innocent friend. Until she reveals her true colors and you have to wonder, has she always been this evil? Or did the jealousy, the victimization turn her into someone like this?

The falling out between these besties is devastating on both sides. They both blame each other for the condition they are in. It is easy to play the victim then to take the blame, and maybe admit that they contributed to the cause.

I am glad that Pisut has seen Peung for who she is from the get go. So it would be interesting to see how Peung tries to win him over. He strikes me as a man who’s smart and not easily swayed. This would be key to keep me invested and interested in this lakorn. The nang ek is already a hot mess, we need a man with a good head on his shoulders.  Top is also in this lakorn and just from the preview, I know I will love his character too. Especially if he gets paired with the adorable Koi, Karat’s younger sister who’s a doctor.

There are a lot of characters to love and to despise. I like Pisut’s mother who doesn’t care about the gossipmongers, and who acts as a commentator for the show, her most memorable line about Karat’s family is that even though they are rich, they don’t seem happy. Truer words. Karat’s mother pushes her own husband away from her, and I love that her grandfather and the rest of the family calls her out on her mouthiness. There’s more drama in store for Pisut, his father is struggling with his business and is determined to get his son to either quit his professor job and work for the ministry or marry the minister’s daughter.

I feel for Karat and her situation: the tearful, tender scene is heart wrenching. But she does take her character’s feistiness to another level. I’m quite interested to see how their love story develops though. Right now we know they are attracted to each other, and he has always been there for her during her darkest hours. But their character differences, whether temperamental or social, can seriously tear a normal couple apart. Added to this recipe is vengeful best friend, one will have to wonder how one can stay sane.

Even if we have to admit ourselves to the psychiatric ward, I am totally game. Two episodes in and my mid week just got interesting again.

By the way, Pope and Ploy are so cuuute together! I can’t wait to see Ploy giving him a makeover. Pope is even more adorable without glasses. Some scenes to look forward to: 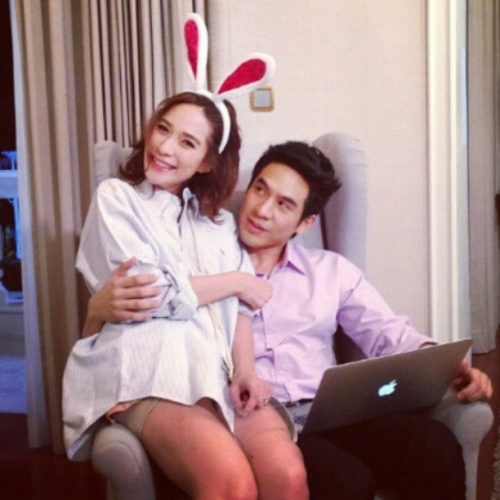 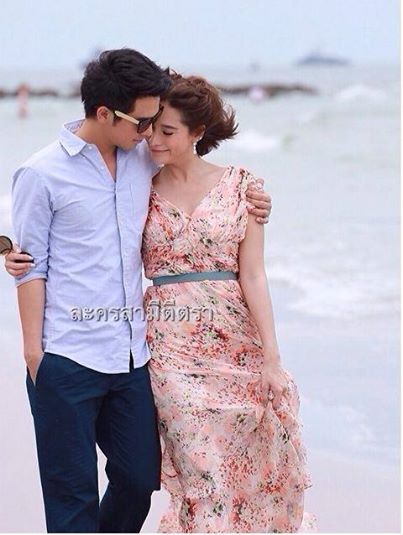