The familial world of Samee 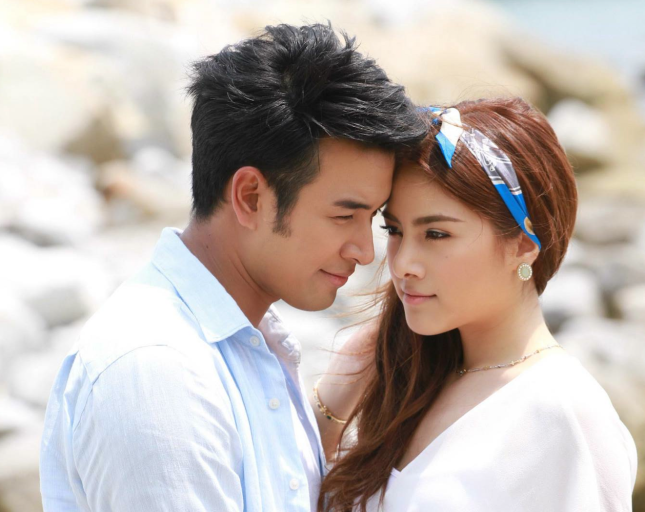 Do you care for a family drama? Perhaps with a side of nobility- old money meets new money- as well as swallowing enough pride to save your legacy? Samee (Husband) our mid week lakorn, is about to take us for an unforgettable ride, in that we’ve been here before, 13 years ago to be exact.

This time around Grate Warintorn and Pream Ranida, from Khun Chai Tharatorn, reunites with a slew of dense, memorable cast. Pream takes on the role of Mom Ratchawong Rasika (Khun Ying Eye) who has been brainwashed since childhood to hate Jao Sua, a wealthy Chinese man. Ying Eye is a proud, stubborn woman who holds on to the last thread of her legacy even when she learns that her daddy drove the family wealth into destitute after his unfortunate death. She vowed to keep their palace in tact.

Oh but her dear jealous-ridden uncle decides he wants the palace and threatens to revoke the palace if she cannot pay her daddy’s debt in two months. It’s not a lost love between her family and her uncle’s family, since there are no blood ties, and they dislike the overly proud nobles.

Her mother on the other hand has caught the attention of Jao Sua, (who apparently has been waiting for 20 years for her hand), the very man that Ying Eye has been trained to detest. Jao Sua offers her mother marriage, wealth and even promises to buy the venerable palace from the bank’s possession. Ying Eye openly disagrees with the matrimony.

Which despite her portrayal of snobbery, Rarb (Grate Warintorn) is quite smitten (albeit secretly) with her. He is the son of Jao Sua and deems his father deserving of any happiness late in his life. The Chinese family, including three sons and three daughters, perhaps with different mothers, make up the remaining cast.

One daughter in particular caught my attention, Rung (Mint Natwara) who has something quite intriguing about her character in this lakorn. She and her father Jao Sua, seem to be up to something. Jao Sua wants a good wife for Rarb and thinks Ying Eye is the woman for the job. Rung then sets to steer Ying Eye’s supposed love interest/boyfriend from her by offering him easy money to work for her. Anybody half a mind would misunderstand her proposal. But it’s evident that the man isn’t that sold on Ying Eye if he could be so easily swayed. Mint is very lovely in this drama, and her portrayal of Rung is spot on.

The dialog and script in Samee is so sharp and so much like a debate that you can’t look away. There is no such thing as fast forwarding in the first episode.

Not to mention, our leading man is certainly not an average gentlemen or hero. He has a son previously, whom he adores, and his first encounter with Ying Eye isn’t based on hatred, he merely wants to tease her because she’s so uptight and proud. Even when she hates his father’s guts, and his too by default, he doesn’t hate her or vow to get even. He is curious about her, sure, but he has also seen the good side of her too. Rarb is not the perfect man, far from it, because he has a relationship of convenience with another woman, who becomes pregnant with his baby. The lakorn shows us what kind of a man he is, without giving us a delusional look at a clichéd hero. I’m not sure if I like him entirely yet, but I can appreciate that he’s real. Perhaps I will grow to like him.

The lakorn is so fast paced that in the first episode, you get the gist of each character yet it’s probably going to take until episode 4 to fully delve into the plot. Obviously based on the title (and because I’ve seen the lakorn 13 years prior) Rarb and Ying Eye will inevitably marry, because for one, Ying Eye feels responsible for preserving the palace (and only remaining family legacy), and secondly, Rarb will agree to marry her because he’s already in love with her. But you can only imagine the drama that is in store for us, no? Ying Eye is quite beautiful and will have many delusional men after her. While Rarb has his own fair share of love interests. Not to mention the rest of the amazing cast!

What I do know for sure is that we will get clever rebuttals, witty dialogs and sharp plot development that I’m already looking forward to the nail biting tension that is to come. Drama for your mama.

Gird your loins, Samee is about to take us on a wild ride. It’s one of those lakorns that will suck you into the storyline, leaving you wondering what the hell possessed you to watch it in the first place. I don’t care, I’m sold.