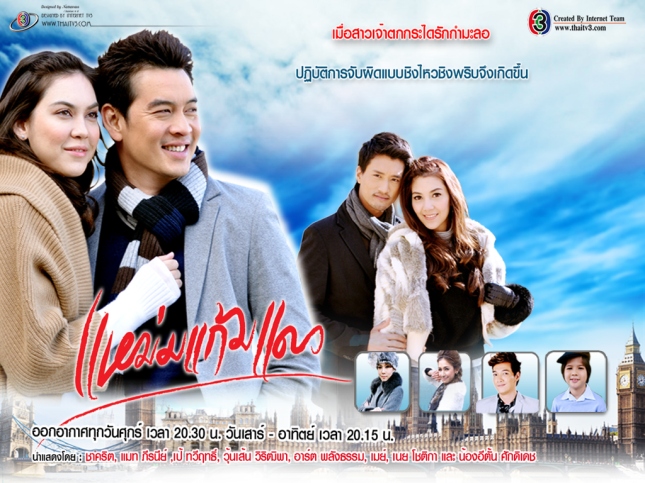 Mam Gam Dang (Red-cheeked Madam) is a destination lakorn set in London where Anamika studies abroad with her three best friends, Metawee, Art and Napat. The drama introduces us to a Thai student’s life abroad, and how they remain in their familiar community: Ana works in a Thai restaurant and hangs out with her Thai friends- she even has Thai nemesis as well- creating a clear difference in social class even in a foreign country, yet indicating one’s need to connect with people of similar heritage. Since Ana and Mey are from the working class, they must work for a living while their wealthier counterparts peruse London’s expensive boutiques.

One fine day, at the end of their term in London, Pat discovers that he is arranged to be married to Praewa back in Thailand. After conferring with his three best friends, they all contrived a way to get him out of the bind. Lying was not their forte so at the spur of the moment, it was decided that the fearless of the lot, Ana, would pretend to be Pat’s pregnant wife. Unfortunately, the biggest person they needed to convince was Pat’s older brother, Nadol, who is cynical and authoritative. Ana signed on to play this charade not realizing how involved and how much lying this would entail. She primarily did it because Mey is in love with Napat and she wanted to help them fall in love, and she would be paid to be her best friend’s wife. In Ana’s eyes, it was a win-win, even if it was shameless.

Towards the middle of the lakorn, we are taken back to Thailand, the home in which the four best friends would make their dreams into reality. Except for Ana who has to continue her charade with Pat’s family, putting her own dreams on hold. However after spending more time with Nadol and working for him, she eventually realizes what she wants to do with her life.

The second love story of Pat and Mey is nothing to cry home about. Pat is not only stiff but his characterization is one of weak, lame and irresponsible. He cannot even confront his parents and grow some balls regarding his arranged marriage so he contrived to lie to them instead. But his characterization didn’t stir much of an emotion from me (even anger) because well, his acting sucks. His redeeming quality however, lies with his friendship with Ana. As for Mey, if she communicated to Pat that she is in love with him from the beginning, then things wouldn’t have gotten so out of whack, but communication is not one of her strengths.

Nina and Kate, Ana’s nemesis, serves as additional conflicts to the four best friend’s attempt to convince Pat’s family that Pat has a pregnant wife. Nina is Praewa’s sister and at first, she appears to be a doting older sister. However, as time goes by, there is a motive behind her adamantly forcing Pat’s hand for Praewa. Kate is Nina’s best friend and her minion, but when the finale hits, she grew some spine and tried to convince us that she was just waiting for the right time to show that she’s the evil mastermind behind it all. It’s just bizarre.

A lakorn that defies the typical, clichéd plots of the pr’ek hiring the n’ek to be his pretend wife, Mam Gam Dang showcased the development of affection and love from unlikely of parties, Nadol and Ana, and how they cope with this feeling. To Ana, she is allowed to develop this feeling for Nadol because her “relationship” with Pat is a sham. Their circle of friends all knows this and cheers them on. So the only one left feeling like a fool is Nadol, who bereft himself constantly that he should not fall in love with his brother’s wife. It tormented him and we watch with fascination at his anguish and roller coaster of emotions.

The chemistry between the leading characters brought this lakorn to life and I felt the only saving grace- they did an exceptional job in showing us how Nadol fell in love with Ana and his eventual shocking reaction to the truth. What is missing for me however, is how Ana fell in love with Nadol. We know that eventually she has feelings for him and wanted to tell him the truth but her story felt weak to me. It felt one sided and a heavy emphasis on the leading man’s struggles with his feelings and not believable enough on the leading lady’s side. Although I liked her carefree, nonchalant attitude, I felt that it ended up playing against her because we don’t have enough substance.

I wished that lakorn writers and directors can create a meaningful ending as much as they have focused on the beginning and middle. Mam Gam Dang- after so much emotional investment in the characters and storyline on my part- unfortunately fell flat in the end, leaving me both perplexed and frustrated. If completed with a solid reconciliation between the leading characters, this lakorn had the potential to be fantastic. But at this moment, one can surmise that Chakrit and Matt Peeranee make a great onscreen couple and that Great Warintorn is a budding writer- which at the end of the day, still gave me something to talk about.

The picture above is totally unrelated to the lakorn, but it’s very fitting to Nadol’s “fierce” characterization!