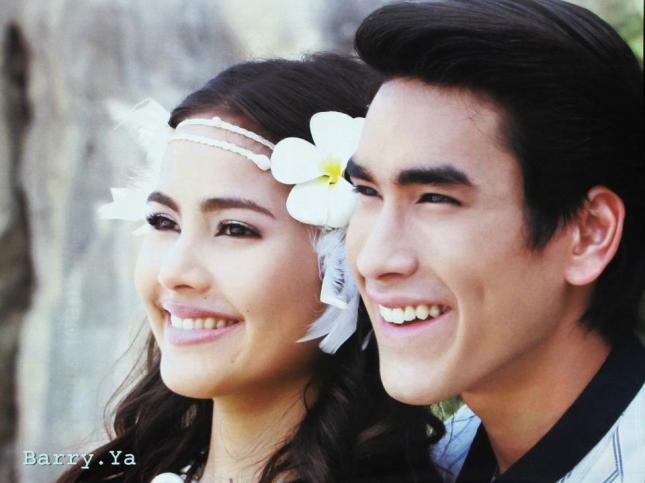 Evil Game Love Game, a title that speared imagination of overly dramatic account of love and revenge, actually invoked the opposite reaction in me, which is laugh out loud funny, touching and a fever for the main leads that can’t seem to be put out.

The drama starts with a startlingly beautiful tale of how an islander (Nadech Kugimiya) meets a stranger (Yaya Urassaya) that was casted from the sea. He took her under his wing and cared for her as she lost her memory and reverts to childlike behavior. Through his care and attention from the villagers, the stranger is brought back to mental working order and she falls in love with her savior. The two then marry and all hell breaks loose.

The viewers are then taken on a dark turn in the story when Nangfah’s family, which is made up of her sister Chompooprae (Mint Natvara), contrived to bring her sister back to Bangkok by any means necessary as she was led to believe that Nangfah was abused on the island. The breakup scene tops the most tragic, heart wrenching separation in lakorn history. Knowing that the two are newlyweds and planned to start their lives together, and then to witness Nangfah getting literally torn away from Saichon, was heartbreaking to say the least.

Nangfah, whose real identity is Fahlada, undergoes a drastic procedure to retrieve her memory but unfortunately as that succeeded, she ended up losing the memory she made on the island instead. Through pure survival instincts and the dream of meeting his Nangfah again, Saichon perseveres through life. Separated by three years’ time, the drama takes on an inspiring turn as Saichon, now Charles, meets his wife again. There is such thing as fate!

A new conflict unfolds as Charles learned that their lives now are drastically different from the lives they led back on Min Island, everything is slightly more complicated. What is pleasantly surprising however, is that upon learning that Nangfah does not remember the events of their past, Charles became devoted to wooing her again. Anger inevitably followed however, due to some misunderstandings and set up by the villains- Charles thought that she finally remembered him but chose to forget him. Devastated and hurt, he lashed back and wreaked some vengeance on her. Despite his intentions, it is hard to hate Charles. His actions speak louder than words; he lives and breathes his love for Nangfah. He’s the kind of hero who will fight for you and love you with all of his heart. Who can hate someone like that?

Game Rai Game Rak is optimistic with a moving love story, melodramatic villains and a reality based ending. But on the flip side of that, the storyline felt more biased towards the leading hero’s struggles, perhaps that is why more people empathize with Charles/Saichon’s character. The leading heroine felt more like a device to challenge the depth of Charles’s character, while her own character and motive unfortunately fell a little flat. Nadech’s character is so compelling that fans couldn’t decide who they liked better, Saichon or Charles. Which makes you want the story to continue beyond the 21 episodes so we can see more from Fahlada’s perspective, perhaps an “after the happy ending” sequel.

At the end of the day, what I got from this drama is much more than your typical revenge lakorn, I got a sense of appreciation for fantastic on screen chemistry between Nadech and Yaya as well as the director, who brought many of Ann and Ken’s collaborations. The drama may not be for everyone, but it would be silly to ignore that it is made successful due most in part to Nadech and Yaya’s chemistry. And based on their chemistry and portrayal of their characters, I was enthralled, enamored and officially bit by the “Yadech” bug.

Lastly, you can also take away that two people who have faced insurmountable obstacles, can still have their happy ending. Thank god.

(This review is long overdue! I sincerely apologize!)