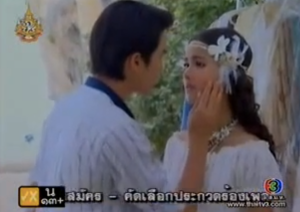 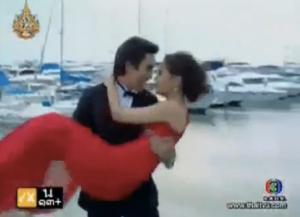 I can see why they cut the island scenes shorter, the last few city scenes were really, quite sweet.

We are shown the development of Charles character, who is smart, understanding and reasonable. All the more reason to empathize and love him. I really have come to like this grown up, urbane and sophisticated hero.

What led to this conclusion- although not instantly since the director kept me guessing- is his determination to get his wife back, whether that means to rekindle her memories or to tenderly make her fall in love with him again. He is not angry at her for leaving him and breaking her promise, because he discovered that she lost her memory, it is not her own doing. Which propels him to execute a plan to bring her memory back, and since he cannot take her to Koh Min, the next best thing is to reenact their scenes together.

That’s why he made her his presenter. Last week he chose her to help market his airline and she has decided to use his poignant love story for the inspiration. As the whole crew head to film on location, it turns out he also has to be the presenter since the male actor was remiss. Donning on his island clothes and reenacting their island scenes together was absolutely sweet. Thus far, every screenshot of Charles is like a vision out of a magazine. He has blown me away with his good looks as well as his acting.

But I got to thinking, the story hasn’t made progress as far as Fahlada, it does nothing to bring her memory back and we don’t see that she has shown any special affinity to him yet in Episode 10. I did notice that she is attracted to him and is confused by her feelings. But these things take time. And secondly, the purpose of the scenes on location is to set a motive for Chompoopae instead.

As if I don’t already dislike her. Now there is a new meaning. I have a few words for her, but they’re all not entirely nice or civilized. We’ll just leave it at shameless bitch. We start getting more definition to her character and what she is willing to do to get what she wants. She is jealous at Charles attention with Fahlada and even tries to blow his ears when Fah let her borrow the necklace he gave her. Charles answered with a, “I know what type of a person Khun Fahlada is.” I love how he has so much faith in her and doesn’t succumb to people trying to convince him otherwise. Besides, he has already mentioned that he doesn’t trust Chompoopae.

Chompoopae is in love with Charles and is seeing red because he is paying her no mind. But instead of being angry at him, she blamed her sister. Chompoopae even tried to get his attention by feigning a drown so he can rescue her, even though she was a former swimming champ. Little things like that shows her desperation. But nothing beats the moment Charles tells her that he is in love with Fahlada.

Screaming at the picture of her and Fahlada, Chompoopae vows that Charles will be hers. Apparently this is the last straw from all of the times Pae feels that Fah has taken everything from her. This is pure jealousy. It makes you think that her sisterly love was very slim to begin with. And the person who is the most unfortunate in this story, is really Fahlada.

At the end of Ep 11, we get a glimpse of bits and pieces about Fah’s struggles. During her physical check up with Dr. Wattana, she tells him that she has been getting more nightmares. Ever since she studied in America, she has always dreamed of a man. She doesn’t know who he is, she just feels like she belongs to him (OMG so sweet.) Therefore she dared not open her heart to any other man. Until Khun Charles showed up. Now she has been dreaming of him too. At least at this point we see signs that Fahlada has feelings for Charles.

Dr. Wattana asked her if she likes Khun Charles but we didn’t get an answer. However, he speculated that because she must like Khun Charles, she is getting more nightmares due to her guilt to the man in her dreams. This revelation is shared with none other than his fiancée, Chompoopae. Which fuels her need to do something.

While she was checking out of the hotel, she saw Yia Sa again but could not remember who he was at the time. But now that she recalled, she summoned him to find her sister’s husband, because she wanted Fah to gain all of her memories back. Yia Sa as well us the audience, soon learned that her efforts weren’t so valiant after all. It is quite funny how Yia Sa learned that Chompoopae is in love with Charles and wants her sister out of the picture, he says, “I want to retract my comments.” The fact that he once said Chompoopae was a good sister. When it comes to loving the same man (between two sisters) it will be to the death.

Truer words could not be said. But he would need to add that one has to be a jealous, shameless bitch to begin with- I digress.

Poor Fahlada, she doesn’t know what’s coming for her.

Chompoopae tells Fahlada to stay away from Charles because she doesn’t want people to think that her company is improving because she got her sister to be the presenter, god forbid. Fahlada however agreed to keep her distance, she is a good sister after all.

But Charles was having none of that. He noticed that she’s avoiding him, not picking up his phone calls, etc. He is concerned and has up his game by deciding to tell her the truth, the whole truth. He feels like she’s slipping through his fingers and taking it slowly is not going to work as he had planned. Unfortunately things are not going well, his father had a heart attack and he must fly back to the states to see him, thus postponing the truth until he comes back.

Chompoopae used his time away from Fah to hire Yia Sa- we don’t know what for yet, but it doesn’t look nice. We know Yia Sa has his own motives, he hates Saichon’s guts and has always wanted Nang Fah to himself. He definitely has something sinister up his sleeves.

I love the suspense! Something is going to happen to propel Charles to hate both Fahlada and Chompoopae, I just don’t know what that is! Let the games begin…

Fahlada is the innocent bystander, a casualty of war, caught in the onslaught of Chompoopae versus Charles. This just reminds me of Sawan Biang all over again, and to be honest, I don’t really mind.

I don’t know about you, but Charles has won me over and I am rooting for him, whether he remains sweet and kind, or turn vengeful.

Tune in to Ep 12 today to see how that will play out!

No part of this blog’s contents may be copied and pasted (including copied and pasted on your blog, website, facebook, forums etc) without prior authorization. All contents are written by Lovefia. You are welcome to link to the post/pages but please do not steal.