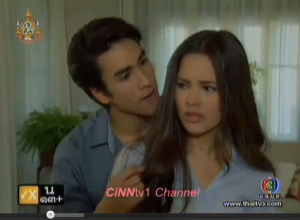 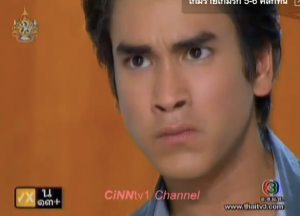 The set up to mess with Fahlada’s head commenced. Chompoopae has all of the aces in her hands and is prepared to dish them out to her sister, one by one.

In the previous episode Charles had left for America due to his father’s illness. During this time, Yia Sah took the advantage to plant a seed in her head. He told her that he was her husband. Fahlada is scared and confused. He knew who she was and has broken into her home. There were months of unexplained absence prior to her being hospitalized. Too many uncertainties to rule out that Yia Sah was lying. Before Yia Sah was able to hurt her, Dr. Wattana came to her rescue.

He too is worried. He knew that Fah was married on the island with a man who lied and was evil to her. Yia Sah fits the bill. Dr. Wattana confided in Chompoopae who brushed it off, as if it was no concern. But deep down, Chompoopae is ecstatic. It was time to play another card.

Fahlada approached her sister one morning to find out what happened to her during those long months away.

When she found out the truth, she stalked slowly to the bathstall and cried anguish cries. While fully clothed, she roughly washed herself, feeling disgusted with her body and used. Although she hasn’t recalled all of the events, the thought itself was repugnant. Chompoopae told her sister that the people on the island lied to her and her husband used her while she lost her memory. She believed the lies wholeheartedly, especially when coming from her dear sister. Chompoopae may not deal a physical blow, but emotionally, she has scarred Fahlada.

Anxious to rid of her past, Fahlada met with Yia Sah, not knowing that this will seal her fate. Yia Sah wanted his revenge, and he was going to get it. While talking to her, he was also taping their conversation. Fah said that whatever happened on the island was a mistake, she didn’t know who she was at the time. She needed to forget everything that had happened. Yia Sah named his price.

With hoards of cash, Yia Sah planned his final revenge card against Charles.

Charles is arriving back to Bangkok, optimistic and envisioning a reunion with his wife. He was prepared to tell her everything. Little did he know that his foes, Chompoopae and Yia Sah are several steps ahead of him.

Seeing Yia Sah again for the first time in 3 years made him reel with anger. Grabbing his shirt lapels, Charles discovered that his Nang Fah has already learned of her past, everything in fact, and she wanted nothing to do with him. Charles didn’t believe it at first, but evidences were insurmountable; the voice on the tape recorder was indeed hers, the check was also hers. There was just a tiny, important information being withheld from him.

Charles, like an angry god descending, stormed into Fahlada’s home.

Fah turned around thinking it was her sister, but saw Charles instead. She was confused.

Charles eyed her passport and airplane ticket, “Where are you going?”

“I’m going to America,” she replied.

Charles recalled Yia Sah telling him that he better go find her because she was about to leave him again. “So it’s true,” he muttered, turning sharply to her. “Do you dislike me that much?”

Fahlada looked at him confused, afraid. She has never seen him this angry. “What are you talking about? I don’t understand.”

“Stop faking!” he roared. “I’ve waited for you all this time. I was so hopeful when I found you.”

She backed into a wall, afraid. “Khun Charles-“

He cornered her, “Do not speak!” he silenced her. “Listen to me. Everything that has happened between us, didn’t that mean anything to you?”

“What do you want? You just told me not to speak!” Fahlada shouted.

Charles grabbed her by the shoulders.

“Do you think I believe that you don’t understand?” He held her tighter, “So you want to start a new life huh? No way in hell I will let you live in peace!”

“You’re insane!” Fahlada shouted, “I don’t know what you’re talking about!” She was tired of men constantly harassing her.

“I’ll make you understand,” then he pulled her into his arms and kissed her.

Fahlada pushed him away, “Asshole! I hate you!” she cried.

But he grabbed for her again.

Fahlada tried hitting him but he had her in a tight hold and was kissing her. As his lips roamed hers, she recalled a dream where a man held her tenderly, familiarly. He would bend down and kiss her gently. Fahlada, like in her dark dreams, found herself feeling so right in Charles arms. She held onto him and the fight died out of her.

The following morning Charles awakened to an empty bed. He found her standing by the door so he came behind her and hugged her.

Fahlada immediately turned around and slapped him across the face. She told him that she considered last night a donation.

“It’s nonsense to me,” she retorted.

“Nonsense? I just found out sleeping with a man is nonsense to you. I bet you’ve done this nonsense too many times already then,” he accused.

“Think whatever you want but get the hell out of my house!”

Charles bitterly walked to the coffee table and found her passport and plane ticket. He immediately tore it into pieces.

“Why are you doing this? What do you want?” Fahlada asked, near tears.

“Whatever a husband wants from his wife.”

“Just because you slept in my bed doesn’t make you my husband.”

“How about we make it legal then?” Charles advanced over. “I’ll tell your sister today and we’ll get married.”

Charles grabbed for her again, “You cannot go.” He proceeded to blackmail her and threatened her that if she leaves, he will take everything away from her sister leaving only emptiness. And everything that her father has built will be destitute.

“That makes two of us,” Charles replied, disgusted. He released her. With his shirt still open, he stormed out of her house.

Fahlada decided to stay in Thailand and solve her own problems. She promised not to involve her sister- as her heavenly, dear sister has done so much for her already- if only that were the case.

Feeling sick and abused, Fahlada went to see Dr. Wattana and had a nervous breakdown. She couldn’t fathom allowing anyone else to touch her, deeming herself dirty. Dr. Wattana consoled her and told her that that was her past. He was able to comfort her and pulled her in for a bear hug.

Charles witnessed their embrace and saw red. When he found Chompoopae in his office later, a light bulb went off in his head. He will make them pay.

Gone is the sweet, gentle and understanding man. Replaced with a hurt, angry and vengeful hero. Yikes.

When the preview for next week’s episode came on, I finally breathed, not realizing that I was holding my breath.