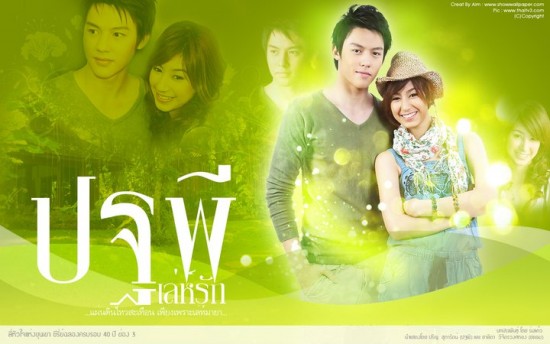 Pathapee Leh Rak tells the story of the oldest Adisuan quadruplets, Pathapee (Din) who is too smart for his own good. If you are a fan of Thai lakorn which features pr’ek who knows what he wants, intelligent and a man who others cannot fool, then this lakorn is for you. Sounds almost too perfect right? Not only does Pathapee encompasses these endearing, sought after qualities in a pr’ek, he is also tall, handsome and completely adorable at the same time.

Owner and operator of a successful resort, Tararin, Pathapee has many neighboring competition that will do anything to overthrow his highly popular, award winning resort. The secret behind its successes is simple; every one of the employees at the resort treats it like it is their own. Yet the competitors are determined that the owner has something to hide and they think that by revealing it, they will beat him. Among the competition and the obsession to be Thailand’s #1 resort, Pathapee keeps a keen eye and nothing surpasses his sharp observation, including Cha-Em who becomes employed at Tararin in order to reveal a secret to shutdown the resort. Just remember, if Pathapee doesn’t want something to happen, it doesn’t happen. And the opposite is true.

I found this lakorn to be incredibly cute: mostly due to the fact that Pathapee orchestrates the cause and effects of the storyline. Cha-Em’s character can use better acting abilities, but aside from that, I thought the lakorn was pretty good. Mark is the main attraction anyway. Tune into Pathapee Leh Rak if you want to watch a smart pr’ek! I know, I talk as if there aren’t a lot of smart pr’eks out there.. it is the case these days because a lot of lakorn pr’eks are easily led by the antagonists. I’m just fed up. Is it too much to ask for the main guy to be smart and wise up to the bad guy’s intentions?