Rang Chung and the Drama 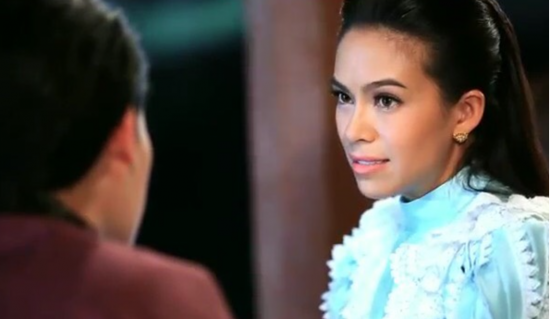 So. Rang Chung is here, a historical lakorn that is heavy on the melo. It’s only forty-minutes long per episode so I figure I’d give it a shot just to see Taya again. She will always be known to me as Prissana, and that is never a bad thing. In this lakorn, Taya dons traditional attire and she stars alongside Kan Kantathavorn. I think the acting is natural and the two have an easy chemistry together. When Taya flashes her dimpled smile, you might need a moment to re-orient yourself. But story wise, it’s heavy stuff. If you’re into melos and high drama, this one might be for you. I’m just here to report my first look at this and then backtrack to my happy place. Put on your hearts of steel if you’re giving this one a go.

The first episode is fast paced and enough to give me an idea on how things will shake down. We open with the younger years, Chong Chang aka Ah-Chang (Kan Kantathavorn’s character, but played by a young actor in the beginning) is Chinese with a merchant father who teaches him that revenge is a merry go round and it’s best to forgive and stop the wheel before it starts spinning. Ah-Chang understands this from the get go as he witnesses a man and his family murdered in front of his eyes at the temple. It was a ceremony to welcome the man into novice-hood so that his parent’s can obtain their merits and go to heaven. Unfortunately the killer claimed that the man had been responsible for his brother’s death and proceeds to kill everyone related in sight. Even Ah-Chang gets sliced in the arm, but seeing that he doesn’t even complain, we know Ah-Chang is one tough but kind individual.

There are also two other boys at the scene, Sak and Noranit who are a couple of local bullies/thugs. They were ashamed that the “Chinese” boy had spot them terrified by the murder and that they wet their pants. They didn’t think they would see him again. We establish hate and this thing we call “revenge” that Ah-Chang so wanted to avoid. Unfortunately when Foie Wang (Ah-Chang’s dad) does his house call to rich government officials to broker his products, Ah-Chang has a run-in with these bozos again. A young girl by the name of NueaNang (Taya Roger’s character, but played by a younger actress at the onset) is the only daughter of the government official’s household and also Noranit’s younger sister. She was plucking water lilies by the pond when she accidentally falls into the water. Ah-Chang happens by on a walk since Foie Wang is talking business, and he saves NueaNang. Unfortunately the two rascals jump him when they see him pulling her out of the water, and beat him to a pulp.

Sak and Noranit immediately hate Ah-Chang on the spot, especially when Noranit’s father chastises them for acting rashly when Ah-Chang saved their sister. These little assholes. We don’t know how Noranit became an asshole – because I truly believe that there are no bad children, just bad behavior and parenting – but we definitely see why Sak is the way that he is: he’s gonna be a carbon copy of his daddy. The man is old but he gives you the creeps – feeling up on maids and having his way with them – despite his wife giving him the fearful side eye but can’t do anything about it. Sak would see dad in action and actually smiles. So gross, I am already afraid of the man he’ll become.

At any rate, Ah-Chang and dad visits NueaNang’s home frequently as we see Foie Wang decorating their home and becoming prosperous as he uses the government official’s network. Fast forward years later, Ah-Chang and NueaNang grow up into fine adults. They convene during a loy krathong event in town, and as they float their little loy krathongs, NueaNang beams a stunning smile at Ah-Chang which melts him. We can see that these two have grown in love through the years. But their cute moment doesn’t last long when older bro, Noranit, causes a ruckus when chancing upon Ah-Chang. Noranit immediately uses his fist, prompting NueaNang to threaten to tell dad. During the altercation, NueaNang loses her balance and gets caught in the arms of Sak, her brother’s friend whom she hasn’t seen in awhile.

But Sak has his dirty eyes on her and was shocked to find her so lovely as a grownup maiden. He is smitten and questions whether Noranit would mind that they become related through marriage. We see Sak has grown up to be just like his dad, forcing himself on maids and slapping women around. In case you’re wondering, good and bad is pretty clear in this show. Our hero isn’t one to succumb to taunts by the baddies, which makes NueaNang wonder why he doesn’t ever fight back. Ah-Chang just smiles and rebukes that she wouldn’t like it if he did fight back at her brother. Point taken. But you know, desperate times..

The event that night makes Ah-Chang ponder about his own status. He asks dad if a Chinese like himself could marry a Thai, he adds that he certainly has seen it happen with other people. Dad seems to think out loud that he wouldn’t mind per se, then it finally dawns on him that his son may have fallen in love with NueaNang. Dad relents that it’s up to her parents.

And that, my friends, is our premier episode. It’s full of hate and anger from the asshole baddies, but it’s a sweet love between Ah-Chang and NueaNang. Their set up is a love that is full of conflict to begin with, cross cultural, social differences, not to mention that big bro is out for blood. He doesn’t like Ah-Chang around his sis and he definitely doesn’t like the Chinese merchant flourishing before his eyes. He sets out to destroy them, while Sak sets out to claim NueaNang. Show is set up to wring tears and hearts.

This is my first time delving into Workpoint channel and the first thing that stood out to me is the Thai subtitles. Did SeesanTV forget to turn off their subtitles or is that just a natural thing with Workpoint? At any rate, I don’t think I will continue, it was a pleasure to see Taya on screen again, but I hope that she will get to play more modern roles and a plot that is more conducive to romantic comedies or even just romantic, since that’s my cup of tea, and I will catch the crap out of it.