When Show’s Got You Feeling the Emoji..

If I could use one emoji to express the first episode of Sai Lap Rak Puan, it would be the smiley face with heart shaped eyes.

It’s laugh out loud funny, adorable, great action sequence, and a winning OTP. It’s not always smart to take the bait for pilot episodes, but so many things about this premiere worked for me, especially Andrew and Ploy’s chemistry and their characterization, that I am hook, line and sinker for this weekend’s primetime lakorn. 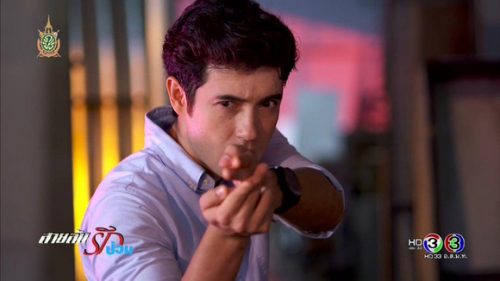 Din (Andrew Gregson) and Ran (Ploy Chermarn) meet during Din’s secret spy operative, where Din is tasked to obtain a baddie’s DNA in order to stop the end of Bangkok as we know it. Din is dressed as a bum and he accidentally walks into Ran who is there on a blind date. Instead of screaming at the bum for running into her and getting her dirty, Ran asks if he’s alright and slides a large bill in his hand. Din is smitten by her kind behavior immediately. Din changes into a server costume next but he overhears how Ran’s blind date is being a total creep and how he takes advantage of her while her mother isn’t around. Ran seemingly tries to be nice to ward him off, but the date is aggressive. After Din accomplishes his task, he sets out to teach the date a little lesson by making him out to be a pervert to every girl that happens by – LOL – and mom/Ran realizes that was a near miss. Ran is tongue tied when her hero asks how she’s doing, she could only stare back and swoon at his adorable bow tie and nerdy glasses. I can relate.

Din replays the security tape during his run in with Ran that day and could not stop thinking about her. He thinks she’s practically an angel sent from above and wonders what she’s doing right now, and whether she knows how much he’s missing her. Swoon. He couldn’t help but listen in on her conversation with her coworkers/friends at the coffee shop next, where he learns that she’s just as smitten with him. She tells her friends that she went back to the restaurant the next day to look for him to no avail. She admits that she felt an immediate connection the very first moment she met him and even if he’s a server, his profession doesn’t matter to her. She just wants him to be a good person. Her friends wonder what she would DO if she were to see him again. And it’s too adorable to watch the two simultaneously find excuses to prolong their meeting upon their next encounter. Their awkwardness and bumbling is so relatable – and when they finally sit down and talk – the spark continues going off. I love that they learn about each other through conversation – Din had her background investigated but he did not open the file because his colleague “Cookie’s” advice resonated with him: if he starts a relationship off with lies, he would have to lie to her for the rest of their lives and eventually their romantic relationship will fail.

We see that Din is conflicted about his profession and his budding love, because he could endanger her life at any given moment, but eventually Din chooses love and pursues Ran, and we watch them fall in love right before our eyes. Could you blame either of them though? Both of their characters are swoon worthy. Andrew and Ploy look so good together, and not to mention separately too. The costume director and makeup artist is on point – Andrew hasn’t looked this good! Look at the pictures if you don’t believe me. I could kind of see Ploy’s hair extension, but she’s gorgeous in every shot. One thing about this actress is that she clicks well with any of her costars- fireworks literally go off. I love that Din is a capable secret spy agent – the fight scenes are great and he comes out on top – while he pulls off the wide eyed nerd who falls in love for the first time so well too. I love that they both swoon over each other and knew that they’ve met the right person, so why prolong the inevitable? Let’s just romance the heck out of each other and see where this goes.. all the way to the alter of course. It’s nice to see how they fall in love before the inevitable marriage, when the real story begins. Don’t mind if I do bask in this adorableness that is Andrew and Ploy. But really, I love the whole package, Show! Thumbs up emoji!