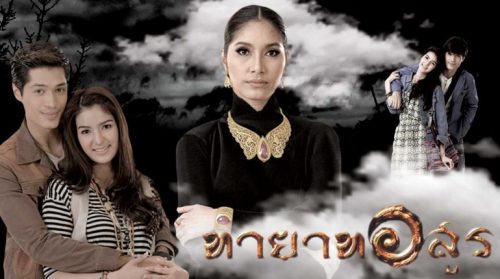 Tayard Arsoon (Demon’s Heiress) is bringing the spooky to this weekend’s primetime lakorn installment. Produced by D One TV, this is the third remake on the small screen, and just the mood, lighting and background music is enough to give you the willies. But when you have Benz Ponchita playing the venerable Grandma Woranat, the demon herself, you got yourself dimensional evil and a heck of a frightening ride.

This lakorn centers around Grandma Woranat who is 72 but actually looks like she’s in her late 30’s. She has stayed away from her family for over twenty years, but her power has weakened and requires one of her family relations to perform a ceremony to extend her life. Now in demon terms, that could mean sacrificial or any other terminal prophecies. She decides out of two of her grandnieces (but we’ll refer to them as granddaughters for simplicity sake – they’re actually her siblings grandkids), she selects Ouiy Warin (Yaiya Warinlada) as her heiress because she’s kind, upright and possibly easier to manipulate. As oppose to her cousin, Naiyaneth (Carissa Springette) who is a pain in the ass, for the lack of a better word. In fact, by Ouiy’s twentieth birthday, Grandma Woranat reaches out to the Ouiy’s immediate family and lures them to her humble abode with an excuse that her health is failing and they shall discuss distribution of her wealth.

Ouiy is a scriptwriter for her school’s film squad and is working on a horror short film, which is fitting since she recently had a nightmare that she was sailing to a haunting ancient home on the river. There, she met a woman (it is her Grandma but she doesn’t know that yet) and she swallowed a centipede. *Shiver. Things start to get really weird on set due to the ghost’s meddling, and her hero bails. The heroine is her cousin, Naiyaneth aka Neth, who’d rather see Ouiy fail and demands that Ouiy find a new hero in an hour and it HAS to be the school’s rugby star, Sonthut (Nut Nuttarat). Neth knows it’s an impossible task because Sonthut doesn’t have a habit of talking to people he doesn’t know and well, he’s a star of the school, he wouldn’t give Ouiy the time of day. See why Neth is a pain in the ass?

So how much do I like it that Ouiy approaches Sonthut during his rugby practice without even knowing who he is, and simply asking him to help his junior out and that she is willing to do anything. That ‘anything’ is being his personal cheerleader, lol. Although Sonthut rescinds his words once the rest of the practice is over, which prompts Ouiy to get indignant, in the end however, he shows up at the filming location as Ouiy’s hero. Neth is practically simmering with jealousy, Ouiy thanks him and apologizes for her brief indignation, and Sonthut gives her a frickin adorable look. Love it.

This pilot episode has a lot of setting up to do, such as Grandma Woranat having to murder Ouiy’s father’s investment partner so that Dad’s business is in dire straits. Therefore Ouiy’s family has reason to pack their bags for a few days and sojourn to Ayuthaya to meet Grandma and see what this inheritance looks like. Meanwhile Sonthut’s dad is on the other end of the bad spectrum, he’s good, and has a premonition about his son and Ouiy. He feels that Ouiy is in the grasp of a demon and if they don’t stop this ceremony, a lot of people will die. There’s urgency and life and death stakes. Neth also finds reason to visit the estranged Grandma Woranat. She has to stop her dad from selling the last inheritance, a land that her mother left to her. Her dad’s wife instigates that Ouiy’s family got invited to visit grandma to talk about her inheritance, it is only fair that Neth go and claim hers. You don’t have to tell this girl twice.

This lakorn feels so alive, I am crediting it to Benz Ponchita who portrays Grandma Woranat as a three dimensional character, she’s mysterious, she’s cold but she’s also warm at the same time. That is why when Ouiy agrees to help her grandma perform the ceremony, I can understand why. Grandma Woranat had been the one to name her when she was born and held her with such fervor. Now twenty years later, Grandma can help her family surpass a financial challenge, and Grandma is only asking her to help her extend her life. Ouiy felt like this is meant to be, she even dreamt of this moment, as ominous as it is. Yaiya is a natural, she’s adorable with her chubby cheeks and plays a kind and reasonable heroine very well. Carissa on the other hand, could probably take a few more acting lessons. I hope she gets better as the lakorn progresses. Nut is so handsome, I’m pretty sure things happen when he’s around, but I’m too busy admiring his height and smile.

Also, there is a significant backstory about how all three (Ouiy, Grandma, Sonthut) lives were intertwined, possibly lifetimes away, which will get introduced throughout the story. It makes me curious to find out what it all means, because in the preview for episode two, Grandma Woranat meets Sonthut and she practically caresses his face with shock and longing. The ending credit song “Rao Koie Rak Gan Chai Mai” (Did we use to love each other?) is meant for Grandma when she meets Sonthut.

So. I’m thoroughly spooked. Hold me. 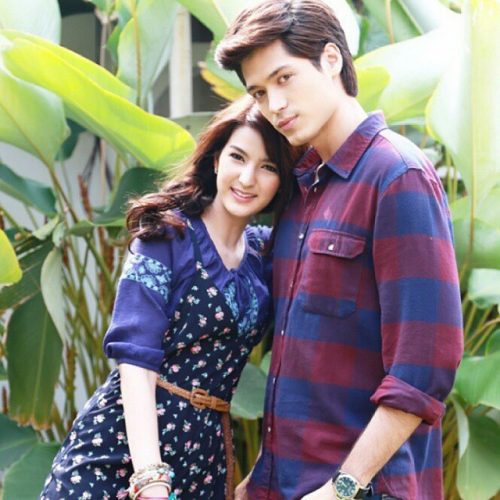 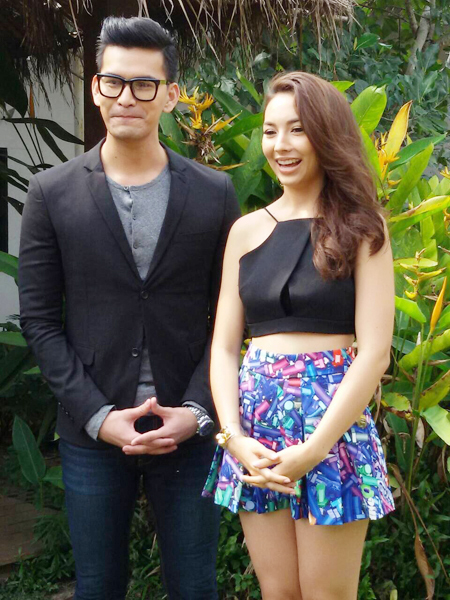 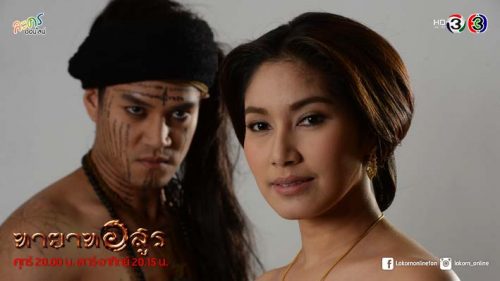