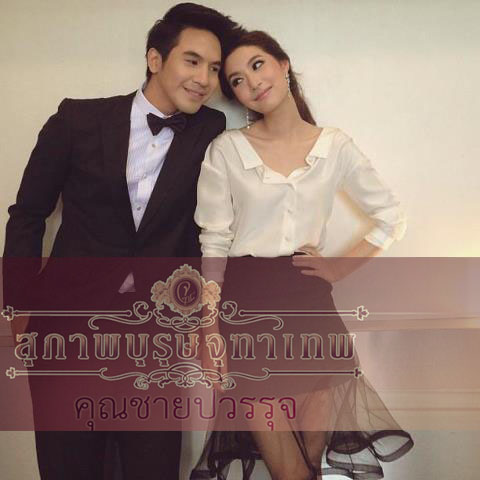 It’s so easy to fall in love with Khun Chai Pawornruj, the second part of the Five Gentlemen Series, brought to us by Good Feeling. It is like watching a hero from a historical romance novel coming to life. There are so many good elements in this lakorn, and I’m enjoying it so thoroughly, that I find myself having a hard time explaining why- probably because I’m too busy swooning.

But we can start with the first and easiest attraction: Pope Thanawat. He is the perfect choice for Khun Chai Ruj. There is so much depth and angst to his character that it grabs you by the heart, and Pope plays it to a tee. Among the five brothers, he is the only Khun Chai whose mother is not of noble blood, and a housemaid to boot. Therefore he is teased as Khun Chai Gon Grua (Kitchen Khun Chai), and even though he is loved and respected by his family members, he experiences prejudice from the rest of the world.

The story opens up with Khun Chai Ruj and his three brothers at the airport picking up their eldest, Khun Chai Tharatorn who is returning from England after a visit with his beloved, Maprang. Khun Chai Ruj catches a glimpse of his ex girlfriend’s face, Watdao who immediately dashes away from him. A year ago, he received a shocking letter from her severing their relationship, and he couldn’t move on, couldn’t understand why she had broken up with him when they were so much in love.

Also at this exciting airport, Tan Ying Wanrasa has just returned from her studies abroad. Her status is higher than Khun Chai Ruj, but they were playmates when they were younger. The two has a connection, a deep bond from their childhood. But after Khun Chai Ruj’s parents passed away, he was sent to study abroad and the two lost contact from there. But Tan Ying Taew still remembers her P’Chai Ruj, a boy who was willing to play with her, a spoiled girl, and he was a big part of her childhood memories.

So she was hurt and stung when they made eye contact at the airport, but he failed to recognize her, much less approach her- as he only has eyes on a woman whom he was chasing through the airport at the time. From that moment on, Tan Ying Taew thinks that he is a snobby Khun Chai and wants nothing to do with him. Tan Ying is betrothed to Tan Chai Thut at a young age, and now that she has finished her studies, her father wants her to marry. Before the matrimony, she pleads to get to know Tan Chai Thut better.

Khun Chai Ruj is a perceptive, astute person. But when it comes to a woman’s mind, he wants to throw his hands up in defeat. They are the hardest to read, and the most confusing too. Because he didn’t receive a closure from Watdao, as far as why she ended things with him, his brother Khun Chai Pat advises that he would never move on or gain self-respect until he confronts her. I like the idea of making it right for yourself, coming to terms with the truth.

The first mysterious conflict in this lakorn is to figure out why Watdao left him- and since his grandmother welcomed her with open arms- Khun Chai Pat surmises that she must have found someone else and he even goes so far as saying that perhaps she never loved Khun Chai Ruj to begin with, and was just using him. Hah, cynic much? After a failed attempt at confronting her at her house, Khun Chai Ruj receives a postcard from his friend in Switzerland with news that Watdao is getting married to a rich European. Broken hearted, Khun Chai Ruj accepts that he can never get back with her, but the back of his mind still needs closure, needing the truth.

The second conflict lies in Yaa Aon (his grand aunt) who vocally, has the biggest prejudice against Khun Chai Ruj. But no matter how prejudice she is, she still secretly (since she doesn’t like to admit it) loves Khun Chai Ruj no less than her other grandsons. She wants to see him with a woman of noble blood too. Remember that darn promise that their father made to his friend? That one of the boys must marry one of his friend’s girls? Well, Yaa Aon finds out that there is an olive branch: there is another girl left whom she could matchmake Chai Ruj with.

Khun Chai Ruj, a gentlemen who internalizes any pain, doesn’t outwardly defy his elders, but when he learns that he is going to have a fiancé, and that his fiancé is young, wild and uncouth, it only confirms to him that his grand aunt sees him as a lowly, unworthy Khun Chai. But he agrees to the marriage, with the condition that he will attend the two months conference in Switzerland first. His grandmother, Tan Yaa, is a level headed and forward thinking woman. She lets Khun Chai Ruj know that he is not being forced to marry, that if he doesn’t find a connection with M.L. Kratin, then he would not have to marry her. But she didn’t want him going on thinking that because she is uncouth, they think she is suitable for him. Tan Yaa explains to him that his own mother had named him Khun Chai Gon Krua herself- because he likes to take care of his siblings and everyone around him- it is his personality, his nature. That story and encouragement from his grandmother allowed him to embrace his nickname.

Meanwhile Tan Ying Taew asks her father to follow her betrothed abroad to Switzerland to get to know him better. She brings her twin BFF’s as chaperones, and the moment she meets Khun Chai Ruj again at the airport and later sitting with him, the sparks fly and the story picks up speed.

Tan Ying Taew, along with her hurt pride, decides to hide her real identity to Khun Chai Ruj. She introduces herself as a mere “Rasa” and has a belief that since he doesn’t recognize her to begin with, he could never, ever know what the grown up, real Tan Ying Taew looks like. It’s such a cute romantic conflict, the fact that she’s hiding her identity but sneakily trying to determine if Khun Chai Ruj has any memory of her at all. Through their jaunt in Switzerland, she learns that her P’Chai Ruj is still that sweet, honorable young man who is always there for her. And an even sweeter concept that her P’Chai Ruj has every one of their scenes, every word exchanges, and every encounters of their childhood time together embedded in his memory. She enjoys listening to the stories of Tan Ying Taew from Khun Chai Ruj’s perspective and couldn’t help herself falling madly in love with him. Upon which she is met with a conflict that she created herself: how will she ever reveal her true identity to him without making him angry and possibly losing him? My advice to her, there is no suitable time. You just have to do it! Better than him finding out from someone else!

Also, how is she going to get out of her betrothal with Tan Chai Thut whom she learns is a player and ruthless, a man who can probably threaten to ruin Khun Chai Ruj’s career? Oh and the ever important, if she chooses him, she may lose her status. But she’ll be his princess (hehehe) since he certainly knows how to take care of a girl!

One word that keeps escaping my lips while watching their many romantic encounters and scenes together: it’s so sweet. Of the purest kind. Pope can look at a girl as if he is looking at her soul. His expression, facial nuances and those big brown eyes! I haven’t gushed over a character as much as I’ve gushed over Khun Chai Ruj. He is my kind of leading guy, strong, doesn’t back down and possesses communication skills! Say what? I love how they are reversing the roles here, Khun Chai Ruj possesses all of the skills of a wife, he also knows everything about what it means to be a man, and most of the conflict that arises in his life is from women who lacks communication skills. Khun Chai Ruj is constantly seeking clarity, asking questions on what is wrong with them and trying to understand them. It doesn’t help when his leading lady seems to have trouble communicating. She runs headlong into assumptions and her feelings.

It’s a good lesson to be had. Don’t make assumptions based off of your feelings. Most of the time they always end up wrong. But I sure love to watch Khun Chai Ruj confused at Rasa’s constant hot and cold, and then at his patience in solving all of her misunderstandings one by one (in a timely manner too!)

Once Khun Chai Ruj is able to get his closure, he realizes that he has stopped loving or having those feelings towards Watdao a while ago, and it gives him peace of mind and the ability to move on. Upon meeting Rasa, and spending time with her, he is reminded of his unforgettable young friend, the little girl whom he spent his time with as a child, and how much Rasa reminds him of her. Through the stories and reconnections, Khun Chai Ruj finds himself bonding with Rasa and falling in love with her. And sometimes, it is not always the destination that we should focus on, but the journey. Good Feeling Production does such a great job taking their time on showing us the love that developed in the sojourn through Switzerland, a country that all of the characters refer to as heavenly.

What a beautiful tale of love amidst social differences, pride (and that invulnerable prejudice) and we get to watch how Khun Chai Pawornruj and Tan Ying Wanrasa overcome their obstacles and find their happily ever after. How will circumstances and fate bring them together? And our Pope Thanawat? Oh so swoon worthy, and he has plenty of handkerchiefs to wipe those tears away. ‘Cause you’re gonna need ’em! 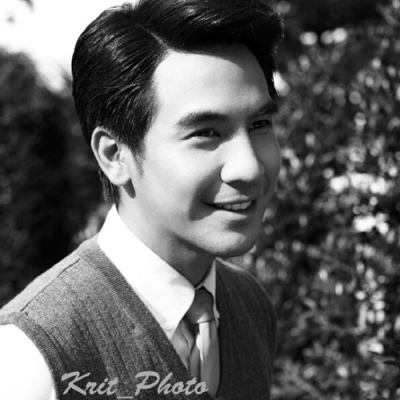 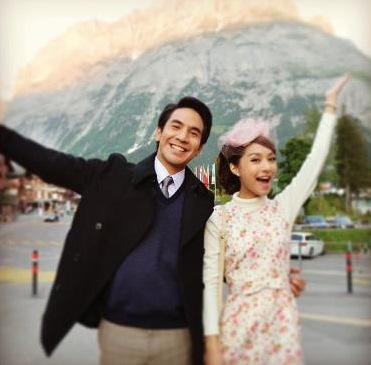 Striking a pose at the train station

Saving her from an angry horse

Found her after she got lost. She gets lost a lot. Bad memories of her childhood where she was alone in an abandoned building- all thanks to him.

The almost kiss. People need to stop interrupting them.

Some angst. She’s explaining herself after he had overheard her handing him off to Eim.

Giving her a piggyback ride after she hurt her feet, running into a skier.

A kiss on the forehead after they’ve come to an understanding.

Gazing into each other’s eyes. He loves her so much.

And she loves him just as much back.