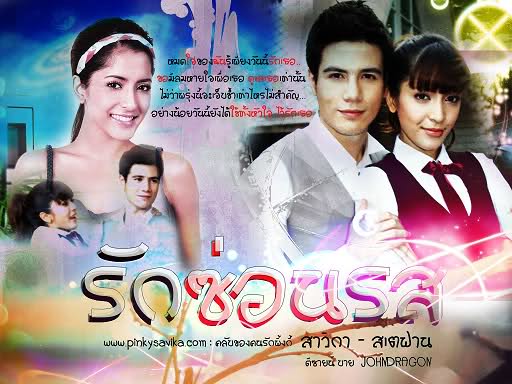 The nice thing about watching a lakorn is going where the actors and actresses take you. Based on their acting abilities, you forget any offenses that they have done outside of the tv screen. Such is the reality for me when I watch Pinky. At this point, I can aptly say that I don’t care what she has done or what type of a person she is (because rumors are rumors.) In the end, she is one amazing actress. Pinky is natural, photogenic and so easy to watch. Combined with Stephan’s tall good looks, Ruk Sorn Rode is an easily loved production.

As I scan the internet for a cast list, I am surprised by the synopsis found on AsianFuse Wiki. If one searched for Pinky Savika and selected Ruk Sorn Rode, one will be presented with a long synopsis of the lakorn. I don’t find that to be surprising. What I found however, confused and floored me. For one, let’s not presume to think that a synopsis is a play by play description of the lakorn. For another, I began to wonder if we were watching the same lakorn. I even scratched my head in confusion. The “synopsis” found on AsianFuse is entirely different then what actually played out in the lakorn. How odd. However for the sake of self preservation, I’m not going to describe the differences. If you’ve seen Ruk Sorn Rode, you would know how it played out. What I will discuss in this post is a short synopsis coming from yours truly, then proceed with my thoughts on the storyline, acting and cast chemistry.

Fahsai (Pinky Savika) grew up in a family of five, which consisted of her father, paternal grandmother, younger sister and younger brother. Her life was easygoing and no one had any inkling of her father’s financial woes. Fahsai’s true goal and desire is to be a Thai chef. Since she was a child, she grew up around the aromatic spices and has a keen nose and talent for recognizing them. However, her dream came to a screeching halt when she discovered her father’s suicide and learned that poverty was knocking at her door. Her youth and dreams (in her opinion) ended abruptly and the audience watch (with fascination) at her attempt to support her family and grow up at the same time. It is easy to shake your head at her naivete, ignorance and even errors in decision making, but one should also remember that she is only a 17 year old girl trying to put the pieces of her life back together.

Tum (Stephan Wisaboonchai) studied abroad for the majority of his life and was sent back to Thailand to handle the family restaurant chain. It appears that he does not have a dream or any personal goals to work towards so he takes on this new task wholeheartedly. Another task fell on his lap (literally) that required his utmost attention. It turns out that a girl in his childhood, whom he cherishes and dotes on have grown up all wrong in his opinion. He was disappointed that she would take advantage of her father, scratch his car and cause uproar and trouble wherever she went. Not to mention that she dropped out of school. He took her failures personally and decided that it was his duty to fix her or change her into a responsible adult. So when the opportunity presented itself, that she owed him money, he made her work in his restaurant to pay off the debt. At this point, Fahsai is still in the dark about Tum actually being the older brother “pi” that she has worship and loved in the past. All she knows is that he is one bossy, overbearing and condescending boss.

Both characters are presented with challenges in their lives that they must overcome to finally find their happy ending. It is a joy to watch when Fahsai discovered that Tum is the little boy she played with when they were younger. It is also wonderful to watch their feelings develop throughout the lakorn and see that each were not what they have expected or originally thought. My problem however with this lakorn is the unreasonable and unjustifiable hatred from the evil person- Payak. He is the sole reason (again and again) of the conflicts and challenges that occurred in this lakorn. It’s unrealistic and utterly ridiculous to believe that one person can create that much damage.

So what is the value of the lakorn? Moral of the story? Premise? First of all, it is easy to get caught up in the melodrama and get lost of the true message that is being relayed. Hell, I was confused at the turn of events. However, what I did take away from this lakorn, is that sometimes if you get too focused on your goal or be too tunnel vision, you miss out on the important things around you. Fahsai realized in the end that what truly made her happy is to cook for her family (they had four kids in the end!) I also found that fate is a funny thing and that the world is small, probably not the exact message that the writer, producer or director wanted to project. But if they wanted to be clear, they can stop being ridiculous with some of the conflicts and challenges. Like for instance- can Payak really screw every darn woman in sight then have the ability to control them to do his every whim? Really? For one, he is seriously not attractive at the very least (sorry Glom Noppon, I really don’t like you.) And secondly, I am disinclined to believe that even the strongest of characters (Chad’s aunt who runs the family business) can be destroyed and overtaken by Payak. Clearly I am frustrated and irritated at some of the lakorn plots. There is truly a reason why I wanted to write by own lakorn in the past! ‘Nough said!

All in all, Ruk Sorn Rode, when removed of the improbable and dare I say it, bullshit,  is really a rather fun lakorn to watch. I suppose if it illicits such strong reaction from me, it is rather good. I will say that Pinky and Stephan are adorable together and that I hope Fahsai and Tum (and their four children) continue to live happily ever after.