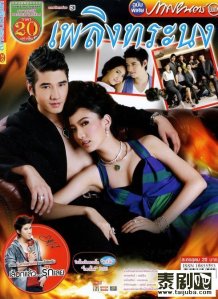 The next episode in this lakorn brings on more drama! We discover why Plerng (or Peung) made a decision to move to Bangkok when originally he was against it. Several occurrences lead to this single decision.

From the previous episode, Peung had just promised his aunt Boot that he would not tell anyone that the donor of the heart transplant was his father’s. So Boot proceeds to tell Kon Ying that the doctor refuses to tell her who the donor is. To further eliminate Peung and his mother (Phong) from their lives, Boot breaks the news that Pipat is dead to Phong who to this point has no idea what happened to her husband. This shows how selfish and evil Boot is, but that doesn’t surprise me. She doesn’t realize how strong and solid the relationship is between Phong and her son.

Just as Peung pays for his mom’s hospital bills, he meets Som-Ang who is a close maid to Kon Ying (but he doesn’t know this yet.) We see another glimpse of Peung’s character, when he sees an elder lady almost black out/faint, he is to the rescue! Little did he know that as he walks her to one of the hospital rooms, he would come face to face with his grandmother. Even without knowing that he was her grandson, Kon Ying immediately feels a connection with Peung and tells her maid to find him. That is when Som-Ang discovered Peung walking his mother out of the hospital. And she surmised the connection.

The diva is back! Numfon was told that she must retape the report in the market again due to a mishap the last time. As she heads back to Ranong, I anticipate another crash in with Peung. However, even though she still has her nose in the air, she really did tune down her diva-ness, because she knew that she needed to finish her recording with their cooperation- that is, Lin (the market’s daughter) and Peung. But it turns out that Peung asked Lin to play nice and let her retape, perhaps it can be considered as advertisement for the market. Numfon appreciates what he’s done but doesn’t have the opportunity to thank him. She then realized that Pipat’s funeral is also at Ranong and decided to attend.

The uncle (I know his name now! Root) and son (sorry didn’t get his name) attended the funeral and proposed that Peung move back to Bangkok with them. That way he could stake a claim in his birthright and take care of his grandmother the way that his father wanted to. Peung was reluctant but deep down he wanted to prove himself. At this point in time, there is still not enough reason to propel him to leave Ranong.

Surprised and a little taken aback that Numfon attended his father’s funeral, Peung and Numfon had a moment of kindness to one another. I love how Peung keeps glimpsing back and forth at Numfon, you can tell he is attracted to her, and reveled at her kindness. He decided to tell her that he had donated his father’s heart to his grandmother. This brought them closer because they shared a secret, she promised not to tell anyone as well. However the happy connection was short lived. Nat (Numfon’s boyfriend/fiancé) discovered that Numfon was at Pipat’s funeral and decided to investigate. He did not like to see them together and felt threatened that Peung would steal his girlfriend. Seriously, this guy has some confidence issues. He also decided to nip it in the bud. He told Numfon that Peung sold his father’s heart for the transplant for 1 lahn baht, I think that’s 10K. (What kind of a lie is that?! Who in their right mind would believe it?) But of course Numfon believes it after a little convincing from Nat. He continues to set up another scene to ensure Numfon would want nothing to do with Peung.

I guess I should also talk about Lin. She is the market owner’s daughter and is territorial and in love with Peung. How she will play a part in this lakorn we will soon find out. For now, we know that she is jealous of every girl that is around him and promised to make him fall in love with her.

Kon Ying discovered that her beloved and estranged son is now dead and that her family contrived to hide it from her. Not only that, her own grandson didn’t even acknowledge her when he saw her. Kon Ying was convinced that her late son (Pipat) hated her and has taught Peung to hate her as well. When Peung talked to his grandmother on the phone and learned this, he made up his mind to move to Bangkok to 1. Prove himself to his grandma 2. Convince his grandma to forgive his father and 3. Allow his grandma to see the goodness in his mother.

Can this dutiful son obtain his lofty goals? How will he overcome the impending challenges before him (in the form of his aunt Boot and two cousins, not to mention the woman who thinks he is completely awful- Numfon.)

Can you imagine such a life changing event that Peung will have to endure? His father recently passed away and now he and his mother are whisked away from the beautiful Ranong to Bangkok where obstacles are abundant. I am anxious to see how Peung will grow from this experience and how he can develop more romance with Numfon. How will she find out that he didn’t actually sell his father’s heart? (What gall to even believe that!) I’m looking forward to the scene where Peung wears a suit with no shirt inside, dancing on stage with Numfon, but who knows when that’s going to happen. Until next week my friends.. for more Plerng Toranong play by play recap by yours truly. (Airs on Ch. 3 Friday-Sunday 8:30pm-10:30pm)