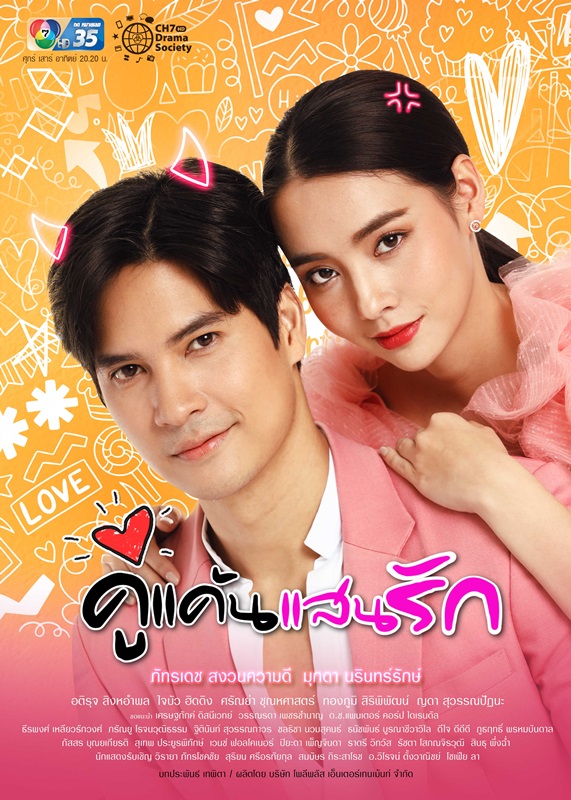 Koo Kaen Saen Rak (The Beloved Foes) starring Mookda and Mike Pattaradet follows the story of a conniving real estate family who is after the last piece of land that is standing in the way of their new development. Mike Pattaradet plays Songkran Thanakun, the only son of Thanakun family who is raised to be a tiger; to be merciless in the boardroom and the bedroom. Songkran is a single dad, but that doesn’t stop his philandering game. He is tasked to acquire the final piece of land by the river, but the landowner by the name of Saeng Nawarat is a stubborn farmer, who refuses to sell due to sentimental reasons – the land is his late wife’s beloved property. Therefore, no amount of cajoling or money was going to convince him to sell it. But Songkran has his own methods of coercion.

Farmer Saeng has two daughters, InkDao and InkJan, and Mookda plays InkDao, the older, feisty one. She loves her family dearly and her greatest wish is to see them get along, since her father and younger sister are like water and oil. InkDao would be perfectly happy to manage her fruit farm and remain as the homely, freckled face (with a large mole) boss that she is. Her sister InkJan though, is the exact opposite, she’s naive and gullible. She prefers the office life than farm life, so she sets out to apply at a real estate firm in the city, Thanakun Real Estate, without knowing that this company wants her father’s land. Songkran, who is the VP, notices the much familiar last name on the application, Nawarat. When he interviews her for the first time, InkJan is head over heels, he’s handsome and sophisticated, and so very nice to her, and he gives her the job on the spot.

Songkran knew exactly how he’s going to acquire the land, if he plays his cards right, he could woo InkJan, who is bright eyed and bushy tailed, and ready to marry him. Songkran assures his father that he will accomplish this in his own way, but his father knows his son too well – in that he tries to be a tiger, but never merciless enough for the father’s liking – and so he agrees to let his daughter and her husband do the dirty work. They sent some thugs to the farm to sabotage the farm’s reputation by live streaming that the fruits are rotten, and when that didn’t work, they threatened bodily harm if the farmer doesn’t sell the land in three days. Farmer Saeng gets a heart arrest and collapses.

InkDao finds out her sister is hired at Thanakun and she asks her to quit because of the conflict of interest, and because they are just bad people. But InkJan is already in over her head, mesmerized by the fact that a rich, handsome guy is in love with her. They’ve only met recently but the man has confessed his love, introduced her to his family where everybody welcomed her with open arms. But little did InkJan know that she is being duped, they high five and laugh behind her back, salivating over the fact that she’s really that stupid. Farmer Saeng decides to proceed with a will before anything happens to him, he bestows the farm to InkDao and the land by the river to InkJan. Thus, when InkJan hears that the land is very important to Songkran, and that they are planning to build a retirement home there (lies of course), she offers the deed of land to him for free. In her mind, she’s going to be his future wife and what is hers is his.

As typical tiger father behavior, Songkran’s dad sends him to Singapore to manage a project, while he orders his daughter and her husband to finish the job once again, because he thinks Songkran isn’t capable of being cruel enough. The mother thinks that at the sight of tears, Songkran would hand the deed back over to InkJan. They tell InkJan that they are touched by her actions, but that they would feel much better if they could pay for it. They end up giving her a fifth of what the land is worth, but dummy InkJan decides she would give the money back to Songkran when he returns. Once the names are transferred, the Thanakuns turn their backs on InkJan, showing her their true colors. To make matters worse, Songkran’s hi-so love interest tells InkJan that she’s the real girlfriend and Songkran is only using her because he wants something that she has.

Everything fell apart for InkDao’s family, her father collapses again when the demo trucks and diggers appear on his land, and he finds out that his youngest daughter had sold the land to the Thanakuns. By the time Songkran returns, the deed had been done and he manages to reach InkJan over the phone and admit the truth to her, that he had tricked her, but he is willing to make things right by giving her what the land is worth. But all Inkjan wanted is for him to say that he loves her and that he wants to marry her. With this realization, InkJan tries to commit suicide but her father finds her in time. InkDao sees red and decides this is enough, she storms to the Thanakuns home and demands the land deed back, but they just laugh at her face because the deal’s been signed, and if she wants it back, she will need to pay five times more than the amount they paid for. Furious, InkDao kicks all of their butts and huffs her way to her best friend’s (Moddang’s) house.

InkDao vows to get her land back and make all of Thanakuns pay for what they have done to her family, but more importantly, she’s going to give Songkran a taste of his own medicine. Meaning, she will get a glow up, make him fall head over heels in love and then snag her family’s land back. She leaves her family in the caring hands of her “uncle” which isn’t her biological uncle, with the excuse that she has to train the agricultural ministry in the city for a few months. By the time the end of episode two hits, InkDao, now as Dao Pradub, is already sashaying into a new club, in a skintight cat suit, stealing the hearts of men, but primarily one in particular whose eyes follow her every move. If Songkran is a tiger, he will meet his tigress, who is ready to defeat him.

I am so ready to watch the Thanakuns pay, they are bad people and stop at nothing to get what they want. They don’t even play fair. In subtle ways, Songkran does not actually enjoy being cruel, but it seems like he wants to prove to his father that he has the balls to do what it takes to win, just look at the way he put on a show for InkJan. While he thinks his methods aren’t damaging, it is just as bad as the pink suit he wears. I can see that he was raised in that type of environment, but he is a grown ass man, and toying with people’s emotions have consequences. I do like how cute he is with his son, and I look forward to InkDao showing up and rocking his world. I love Mookda as InkDao by the way! She keeps me invested, she has quite the range, from being funny, coy and tragic. I look forward to watching her kick some ass and play mom to Songkran’s boy. It’s time to show Songkran how to do things the right way. I am a sucker for kids and animals, so sign me up!

*Newest weekend timeslot on Channel 7, a remake of 2011’s Koo Kaen Saen Rak starring Chakrit and Aum. I have not seen the previous version, but the combo of Chakrit and Aum is probably a great one to venture back to.

You can watch eng subtitles at Neko’s. 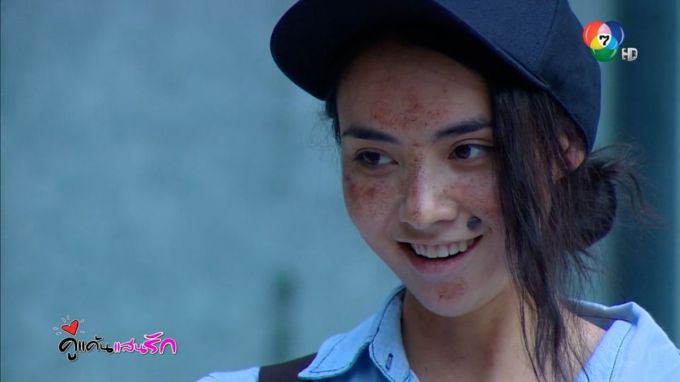