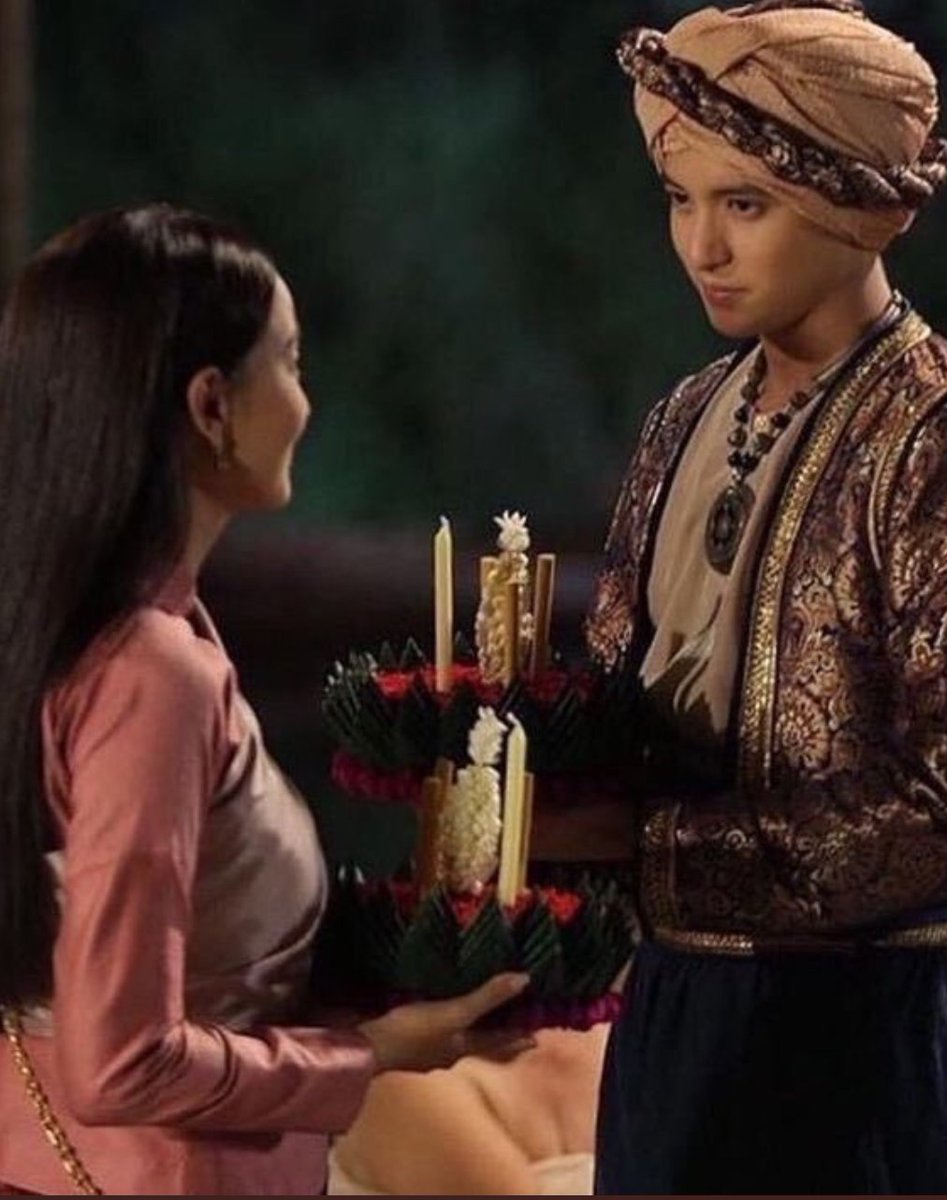 Neung Dao Fah Diew – starring James Jirayu and Taew Nataporn – takes us to the end of an era. The Ayutthaya era that is. It is no longer the charming, easy going, and thriving world that Buppae Sunniwas presented, in fact this time period is a darker time, where the Thai people struggled against Burmese power, as well as their own people, who must decide whom to strike their allegiance. Do you stay loyal to the King, or save yourself by aligning with the winner? In this world, looking out for yourself will paint you as a traitor, and you’ll struggle for the rest of your life, trying to bury that truth.

Phor Kanthong (James Jirayu) is pitted in this world against the traitors who will protect their betrayal at all cost. The first episode is a fast paced storytelling that skips years to get Phor Kanthong from a monk to a fighter and then an undercover eunuch. His father was a Robin Hood type character who steals from the rich to give to the poor, though he’s a bit more unruly than that. Upon his untimely death, Phor Kanthong vows to find the traitor and exact revenge. Team Kanthong decides that the best place to go undercover and seek the truth is in the palace. But as they get help from an insider, a eunuch ends up dead, and Phor Kanthong relents that he can masquerade as that eunuch to further protect the insider (Head Eunuch) and to also investigate the identity of the traitor. And thus, Phor Kanthong becomes Ork Luang See Kanthin.

The journey of uncovering the traitor is no easy feat. Living under this pretense of a eunuch makes everyone nervous, most especially the Head Eunuch who treats Phor Kanthong and his friend as guests in his home who are overstaying their welcome. He wants them to finish their business, but at the same time, he’s just so damn tired of being afraid he would get caught. Although Phor Kanthong is a clever and capable person, he’s still hitting a brick wall wherever he goes. To us the traitors have made themselves known but are covering their tracks so well, that Phor Kanthong has lived in the palace for some time, but hasn’t gotten much Intel. That is until Maeying Mangmao appears and shakes things up a notch, or two.

This TV Scene lakorn (which has four episodes aired thus far) is an action packed lakorn with a serious tone, as much as some humor (from Maeying Mangmao) gets injected periodically. It took me a solid two episodes to finally buy into this world, perhaps it’s due to a severe withdrawal from the boran romcom that is Buppae Sunniwas, or perhaps the serious tone and the costumes of Neung Dao Fah Diew threw me off. But I will say that by the third episode, Phor Kanthong and Mae Mangmao got cuter together, and by the fourth, I’m more invested in the story. At the end of the day, what truly sells a lakorn to me is the personal story of a character, and whether that captivates me, namely, Phor Kanthong in this show.

James Ji took a minute to get into his character; right at the intro it was rough watching his reaction to the report of his father’s death. I was expecting some pain, shock, and then anger. That isn’t what I got, however James Ji eventually warmed up to being Khun Luang Kanthin and his “di chan” and “jao ka” made me giggle and smile, because these are things a woman/eunuch would say, and to hear that from James Ji is adorable and funny at the same time. He also had a meet cute with Mae Mangmao at the perfume shop, where she got angry because he’s hogging the store, and he nicely replied that he’s on duty and needed to carefully procure a perfume. Then later he offered her a selection to redeem her good graces. Through his interactions with her, I grew to like him more, until I realize that his character made me sad. What gravitates me to Phor Kanthong is that he’s the opposite of Phor Daed, in that he has a truly tragic past, and a current revengey present, with no sight of a future.

As Phor Kanthong unravel his own parent’s tragedy – dad was betrayed, grandpa was betrayed, and mom was betrayed/murdered – it’s so fitting that he would regale this story as almost a fairy tale for a boy who does not know what a fairy tale is. Case in point, the scene in the forest. Leading up to this, Mae Mangmao had been in possession of an incriminating note. Little did she know that the note should lead to a journal that a high official and one of the King’s wives have been trying to destroy. The journal details their treason, at the time, the high official had written a note to Burma for protection since he thought Ayutthaya would fall under the Thai-Burmese war. Fortunately (or unfortunately for them) the Burma King ended up dead within a few days and the Burma army retreated. At any rate, Mae Mangmao’s brother warns her never to tell anyone that she knows about that note, since they don’t know who is good/bad and no idea of what the note even entails.

So back at this scene in the forest, the high official decides the safest bet is to eliminate Mae Mangmao indefinitely. He sends two men after her, meanwhile the Head Eunuch takes matters into his own hands and want to ensure Phor Kanthong is an Eunuch for real (every man in Thailand covered their eyes during the too close for comfort castration scene) but ends up getting mauled by an elephant of doom – who seemingly came out of nowhere, but acted as karma and killed the Head Eunuch. Phor Kanthong escapes the castration, though the anesthesia leaves him incapable of much movement. No worries, Mae Mangmao comes to his rescue and they team up to take down the two men who were after her, and thus leaving Mae Mangmao to stare at him, in the dead of night, wondering how she would ever sleep tonight after all that had happened. She begs for a story. A fairytale to put her to sleep.

So Phor Kanthong, as funny and sad as it may be, regales his own story, his narration is void of emotion, as if he’s telling a true fairytale, and not one of his own origin. The story goes that his grandpa is an Ayutthaya man but got betrayed by his own friend who is of foreign descent. Phor Kanthong’s dad vows to exact revenge and became a bit of a bandit, where he steals (and kills) the rich and gives to the poor. He became a well-known name in the area, feared by the rich, and respected by the poor. His time to seek revenge came about when his dad’s friend marries his daughter off. He kidnaps the daughter before she could consummate the marriage and tries to use her to lure the dad out. Instead, the husband came out but in the end he cared more about his own life than his wife, and used her as a scapegoat so that he could survive. Suea Khun Thong (Phor Kanthong’s dad) takes the woman to his abode and tends to her. He keeps her hostage for many months, and naturally, they grew fond of each other and love blossomed. Eventually he sends her back because she misses her parents, but her dad tries to marry her off to the same man again but he wanted nothing to do with her. He doesn’t believe that she remained loyal to him all these months. Suea Khun Thong scales her window and vows to seek revenge for her, but mom tells him to let it go. In the end, dad tells her that he loves her and wishes to be with her forever. Mom runs away with dad and they produce a boy (Phor Kanthong). For years they lived a happy life, and sadly, that is the only happiness the boy has ever experienced. His grandpa found their hideout village and retrieved his daughter, leaving Phor Kanthong behind. He sends mom to the palace to work so that dad may never get access to her, yet tragically she was betrayed and word spread that she committed suicide (though Phor Kanthong learns that she was killed instead). Meanwhile dad sends Phor Kanthong to study under a monk until dad too met his demise, leaving Phor Kanthong an orphan who dedicates his life to seek revenge for his parents.

Mae Mangmao cries at the thought of the poor boy. And I think that’s where it hit me, I just feel really badly for Phor Kanthong. It just seems so unfair that he knew happiness for maybe 6-7 years of his young life. His enemies are sometimes a step ahead of him, he has to pretend to be a eunuch, forgoing any pleasure or just being a man, or even just living life. He rarely ever laughs and when he does experience a few minute of joy (mostly due to Mae Mangmao) he has to tell himself over and over again to never get attached. Now I’m invested in watching Phor Kanthong finding a semblance of happiness in his life. I’m rooting for Mae Mangmao to keep saving him from himself. If anyone can do it, it is she. She’s fearless, tough, smart, and unaware of her own beauty. It is no wonder so many palace men are flocking to her, and I’m loving how Phor Kanthong is getting a little protective about that. Show is getting cute, and I think I’m sticking around to see Phor Kanthong – James Ji – be happy again, and maybe realize there is a future beyond revenge.

Speaking of future. The introduction of Phraya Taksin brings a lot of hope, even for Phor Kanthong. When he looks up at the man who is the air of someone who will hold power (future king), I think to myself, I could watch this bromance between Aum Atichart and James Ji. Heck, JJ looks great with Aum! I hope we get more star struck scenes where James Ji is peering up at his hero, just as we all wont to do when it comes to the great Aum Atichart. Then Phraya Taksin can play like a mentor/teacher and allow Phor Kanthong to realize his true potential, because if anything, Phor Kanthong has learned so much on his own, but could use a bro/daddy figure in his life. Actually, I just want Phor Kanthong – namely James Ji – to be loved by everyone. Because his lonely soul is killing me. 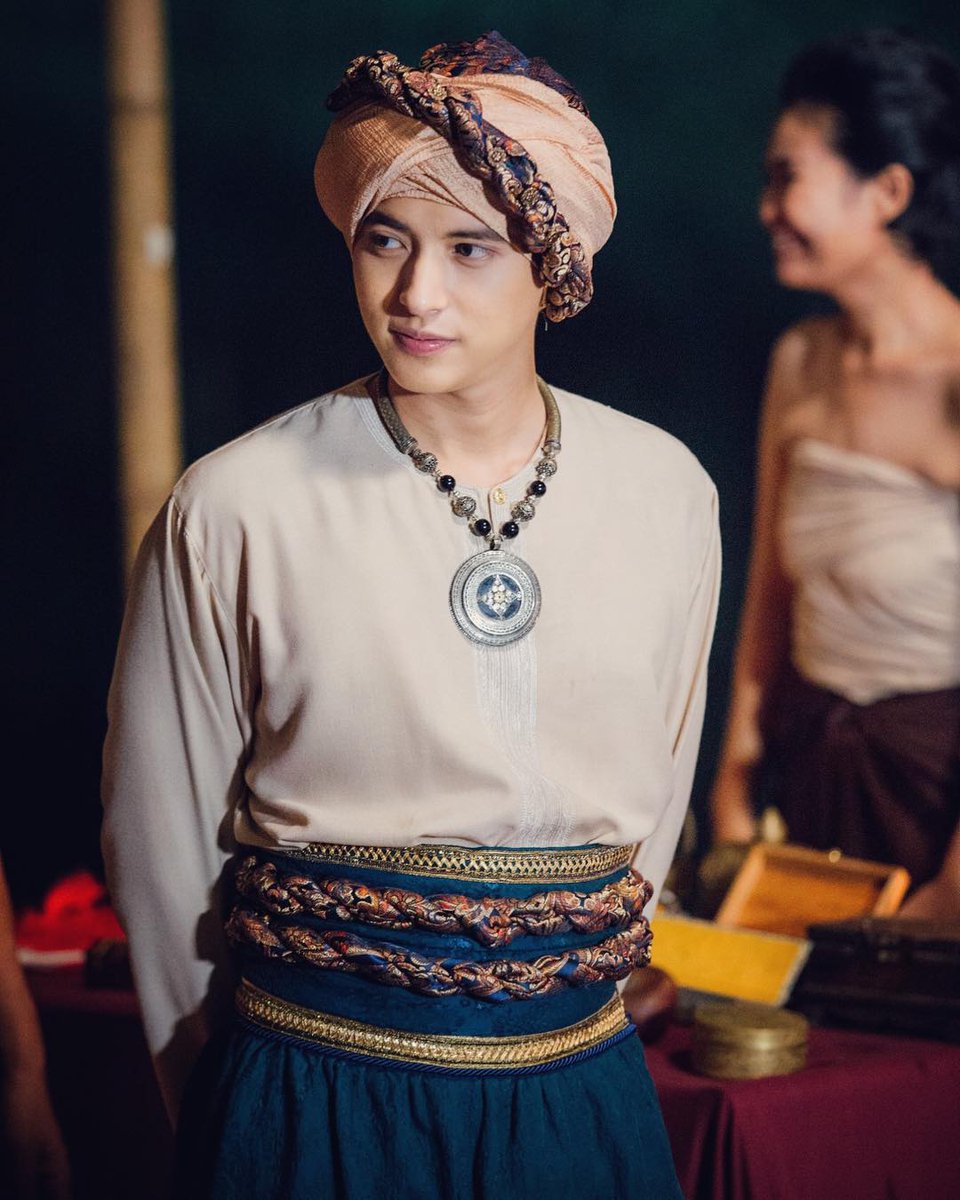 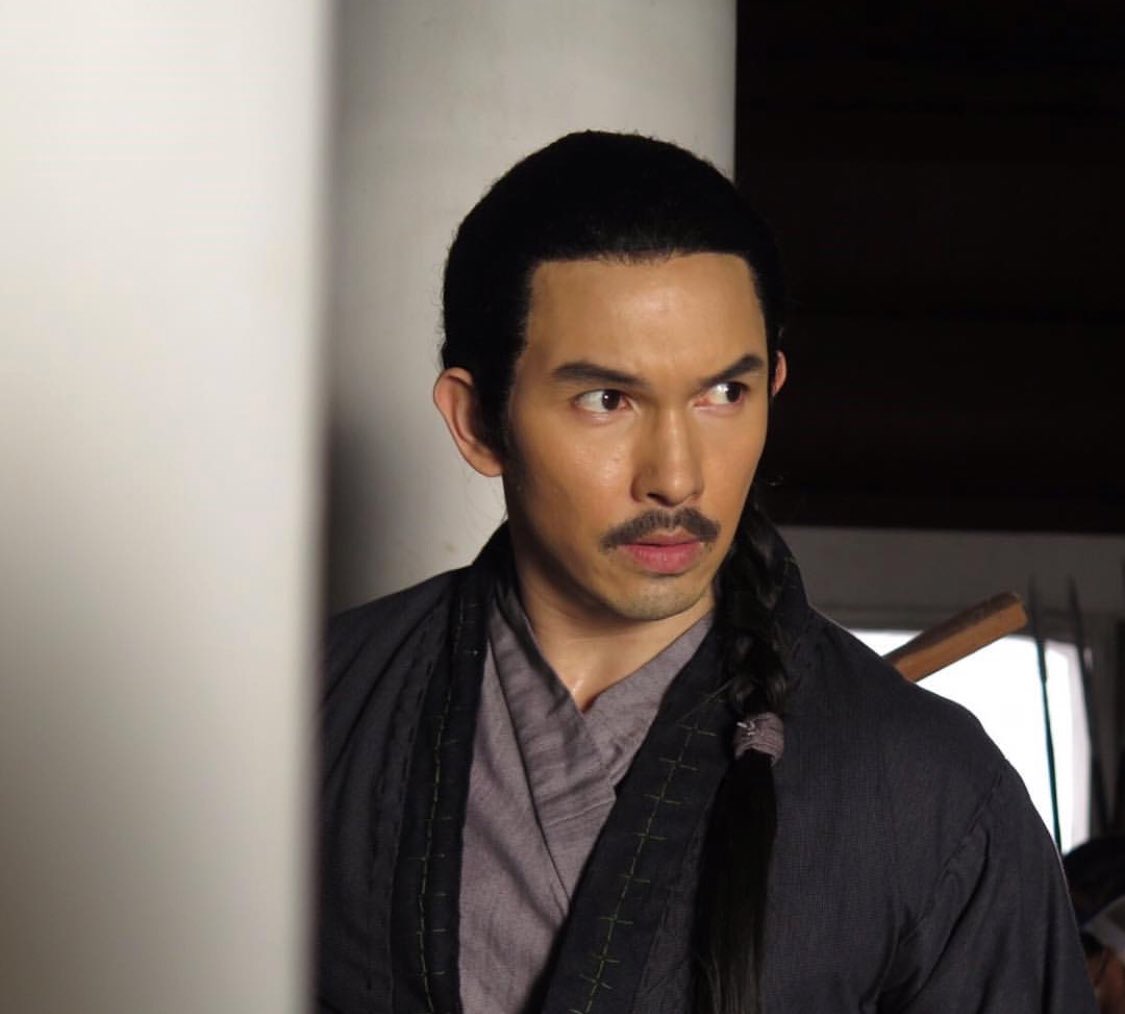 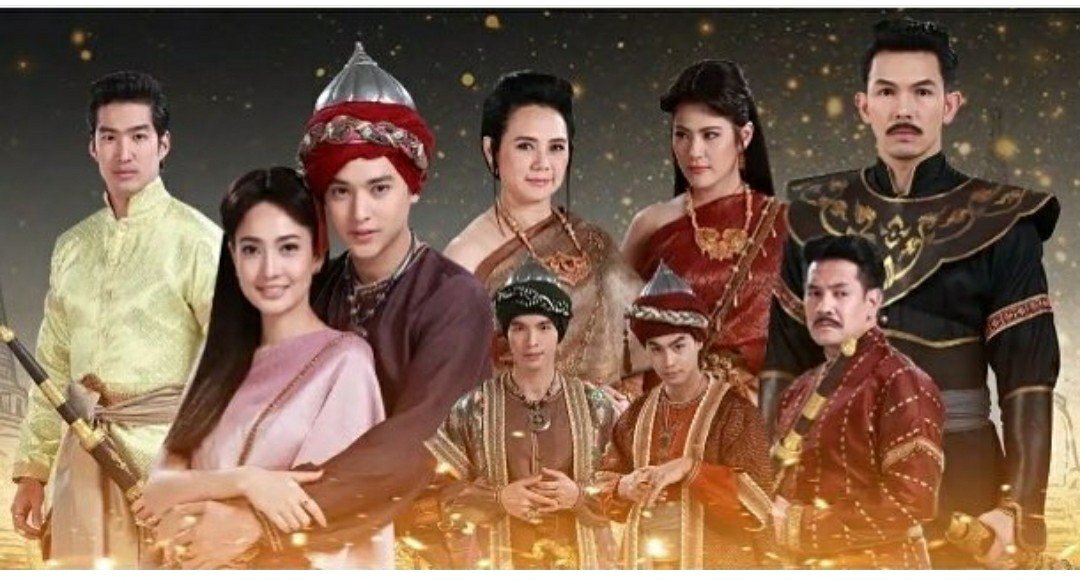