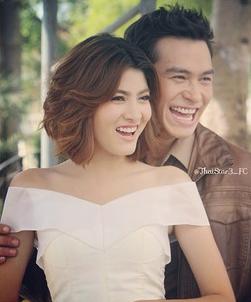 “Just because I play a female villain on TV, doesn’t mean I’m a villain in real life,” Surikarn (aka Soh) says ruefully.

This is the biggest misperception and a conundrum she faces daily in the show biz, but she takes it all in stride. Unlike many daras who play female villains, Soh has her own fanclub. In real life, she is a responsible, easy to work with and has an adorably funky attitude. Not the bad sort, well, only if it’s aptly deserved.

Cat fights, stealing other people’s husband and being a true villain in the sense of action lakorns, Soh can play it all, and that is why she won Best Female Villain of the Year award. Despite the stigma against her, Soh takes pride in what she does.

So she doesn’t take it kindly when a server has the nerve to 1. Break her award 2. Try to scramble without an apology and 3. Insult her hard work!

The aforementioned server is actually a Police Inspector (Sarawat) who’s currently undercover and needs to catch the baddies- and this woman is obstructing justice. Not the first time, either.

On the surface level, that is the premise of our newest weekend installment (airing Friday-Sunday on primetime) with only the first episode released thus far. Good Feeling has brought together for the first time, Peter Corp Dyrendal and Margie Rasri, as Sarawat and Soh.

They clash from the onset, whether that is an almost car accident, a run-in by the elevator where he broke her glass trophy, or at the mall where he mistook her for one of the baddies. In combination with the directing and acting, at first I thought I am watching a train wreck. The overacting, the bad action directing, I couldn’t stop the cringe or peel my fingers away from my eyes. I thought it was one of those horrible accidents that you can’t help but watch. But I stuck around for superficial reasons: Peter is so damn fine and I love Margie’s wardrobe.

Much to my surprise, the story took a turn for the better. Way better. We see a development to their characters, their weaknesses, and depth. Soh seems to be the mediator between her coworkers, the pra’nangs (leading male and female couple) who hate each other. The leading actress in this lakorn world is a total diva and Soh’s best girlfriend. They’ve been friends for a long time and we see how conflicted Soh is about that. Because, to what extent could a friend go for another? Especially when you can see that this is a one sided friendship: Soh is the only one trying.

Sarawat is a hardworking, career man. Not in the sense that he wants to be the best Inspector for the honor and prestige, but it is simply to follow in his father’s footstep, who was a wonderful cop. He seems to live a lonely life, aside from his housekeeper whom he loves like the last remaining family member, and who can bring out the laughter and little boy in him. When he takes his family picture out, we know that momma and pops is long dead.

Things suddenly got very interesting for me. I love the character developments, the teasers of what is to come. Sarawat and his team have been given a very big assignment to take down Richard, their target for drug trafficking. The problem is, Richard seems to like women, and they don’t have any hot single cop ladies to play undercover.

He suddenly gets a bright idea as he watches Soh take down a purse thief. Probably against his better judgments, Sarawat decides to make his next move.

The more I watch Peter and Margie together, the more apparent the chemistry. I don’t think I’ve watched a lakorn where Margie doesn’t have sizzling chemistry with her leading man (just a recent reminder, remember Mon Jantra? Hot!)

So I am glad I stuck around, because now, I’m so itching for another episode.