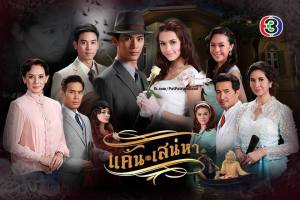 This year must be an aristocratic year. From the Khunchais of Juthatheps to our newest installment of Mom Ratchawongs of Rangsiya Palace, Kaen Sanaeha (Furious Love) is taking over our Monday-Tuesday primetime slot, bringing yet another interesting story to chase away the Monday blues.

Who&Who Production team is spearheading this lakorn, bringing in veteran actor Nok Chatchai (also a director for Khun Chai Ronnapee), another veteran actress Lalita Ponyopas (original Wanida’s leading lady) and our newest addition to the nang’ek roster, Patricia Good from Mr. Farmer and His Hi-so Sweetheart (Noinah), not to mention Son Yuke an X-Act actor. This blend of old and new, and a hint of the drama susceptible to X-Act lakorns but backed by Channel 3, we shall have a very stimulating lakorn on our hands.

We open with the story of a noble couple in Rangsiya Palace. Than Chai (Nok Chatchai) is married to Than Ying (Lalita Ponyopas) but has also endowed his mistress with a noble title, Mom Bulahn who is pregnant with his first child. Than Chai is madly in love with Bulahn, who is a docile and sweet woman, and who also gives Than Ying her utmost respect. But her existence is a pain in Than Ying’s hide. She cries to her royal maid about her husband’s love for only Bulahn, her jealousy that Bulahn can have his child when Than Ying herself has been married to him for five years, but is barren, in which she attributes this to his absence in her bedroom. Than Chai attributes his MIA to her coldness and unwillingness to do the dirty with him.

So we have some furious love in the making already. Than Chai has to go on a business trip, which opens the door for the loyal maid to wreak her vengeance, and this particular maid, Feurng is more than a right hand woman, she is the brains and mentor for her princess. Than Ying listens to pretty much everything she says. Feurng promises Than Ying’s mother before she passed away that she will care for her and protect her until her last breath. She has witnessed how much internal pain this mistress has caused her lady, so she decides (while Than Chai is away) to take care of her for good. While Than Ying is none the wiser.

Than Chai and Bulahn are excited parents-to-be and plan to name their child, Khun Chai Sakdina if it’s a boy or Khun Ying Wimonpayom if it’s a girl. By now you should be familiar with the title Khun Chai and Khun Ying, these are Mom Ratchawongs. Little did the parents know that there is a surprise in mommy’s womb.

As Feurng contrives to get rid of Bulahn, the girl’s water breaks. Feurng helps Bulahn deliver the baby, and steals the infant for her Than Ying. She claims that Bulahn ran away and wanted Than Ying to raise her child. Despite being unconvinced, Than Ying does as her maid bids. Thereafter, Feurng plots for everyone to believe that Bulahn ran away with the gardener, Yord.

But things don’t always go according to plan. Yord is supposed to drop Bulahn’s body in the river, but he chickens out when he realizes that she’s still alive and in pain. She’s about to delivery yet another baby! Ha, and this time it’s a girl.

Yord ends up rescuing her as their body floats to a nearby mansion. In this particular mansion lives a wealthy family whose lady boss is currently going through labor as well. The family has an eldest son by the name of Chat (Son Yuke), who is wise beyond his years. His mother has a heart disease so the labor weakens her until it claims her last breath. Because this is the same time in which the household discovers an unconscious lady in the pond, with a mute man and baby in tow, Chat believes that his mother’s death is the newcomer’s fault. His mother died in their place. Yeah, it’s a kid’s logic. But I’m sure it’s one of those things he’ll remember and use when he grows up.

Bulahn hides her identity from the family and goes by Jan, while the gardener pretends to be mute. The owner of the house allows her to stay with them and she takes on the role as nanny (milk nanny) to the baby girl whom lost her own mother the day she was born. We have a conflict in the making, Chat despises the newcomers- and the youngest one who’s only hours old happens be our nang’ek, Rung (Patricia Good).

Meanwhile the twin brother, Khun Chai Sakdina (Pop Tagore from Khun Chai Ronnapee) is raised in a tense household. Than Chai does not believe that the infant is his biological son, so he ignores the poor baby. He doesn’t trust Feurng and believes she is capable of kidnapping another child and pawn it off to him. He consults with his friend Khun Luang Wiset (Dom Hetrakul from Neur Mek 2) on how to go about uncovering the mystery of Bulahn’s disappearance. Than Ying agrees to adopt Khun Chai as her own, because her maid tells her that this baby will keep her company, he will be the only person in this world who will truly love her. A mother can carry a child for 9 months, but she cannot compete with a mother who raised a child for years. There is a ring of truth to that.

That’s our first episode and an intriguing setup thus far. Fast paced, good acting, and detailed plot. I can foresee a very sad environment for Khun Chai Sakdina, who is going to grow up very rich but lacks the emotional warmth- a happy family they are not. I wonder if his father will ever figure out if the infant is really his son, I hope so for the sake of our second pr’ek. As for his twin sister on the other hand, I am speculating that she may grow up not knowing her true identity, because I doubt her mother would tell her the truth until the time is right. Meanwhile Chat will probably give her a very hard time growing up.

And where does the scary ghost factor in all of this? If the preview for upcoming episodes is any indication, she’s going to be punished for hurting Bulahn and perhaps she may even kill herself in front of Than Chai. She will return to the palace to watch over and protect her Than Ying. But she’s no Casper the friendly ghost, have you seen her face?

Supposedly this lakorn will have plus or minus 14 episodes. I’m also curious to see the young Patricia playing a nang’ek role, this lakorn should offer an excellent opportunity to act alongside a strong cast. I also like the fact that we are still on this Khunchai boat, haha, even though it doesn’t make it any easier to say goodbye to our notorious Khunchais, we can still enjoy an extension of the period and culture.

At least the beginning of my week is looking up.