The end is near, but we’re not quite there yet. Whoops, I’m sorry I lied. But that only means that we’ll have more Id-Korya scenes right? Well, we can always hope. And if this episode is any indication, it’s going to be a rough ride for Khun Id to the sunset.

I’m a little indifferent to this episode, because I feel that they took an entire (precious hour) to rescue Korya and Khun Dara from Nop and Payia’s wrath. Obviously there are purposes behind spending that much time, one, to gain Korya’s memory back and two, to kill off Nop. Despite its rationale, I was disappointed. My favorite part is the last eight minutes of the episode. The pacing is still fast and it is “action” packed, but as far as pre-finales go, it left me wanting more.

So I’ll go into a bit of my ranting (with episode summary of course), details of my favorite parts, then offer screenshots from fans.

The episode opens up with Korya finding herself in the back of a utility van tied up. She attempts to kick the door and shout for help- which did draw some attention by a passerby (this one was on a motorcycle) but only convinced Nop to slam on the accelerator and she gets knocked out again. (Does one always have to lose consciousness when one’s head hits something? It’s completely overused in this drama.) The two villains take Korya to the same place they are hiding Khun Dara, who’s tied up as well. They use Korya as a method to threaten Khun Dara to sign the will, and this goes on for a long, long time. In essence it’s like, “Sign it or else!” then “Or else what?” “I’ll kill your daughter!” then “Fine I’ll sign but you must show her to me.” Needless to say, useless. Now Korya, who is taken to a different room actually manages to escape, but hears a shot explode and surmises that Khun Dara has been shot and returns to rescue.

Then we have a sweet reunion where Khun Dara begs Payia to spend more time with her real daughter. This confuses Korya at first, but Khun Dara explains (once Payia allot them the “alone” time for an hour) that Korya is her long lost daughter. Even though Payia has the necklace, the ring still identified Korya as being the true heir. They embrace and have a tearful reunion. 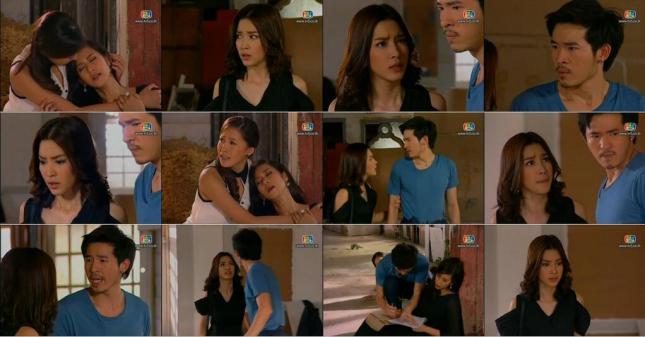 Meanwhile, Khun Id is doing some police work. He’s investigating videos from the condo, running around asking people if they’ve seen Korya and even manages to go to the same spot in which the passerby noticed the van. This only shows how incompetent the police force is to allow a mere Samaritan to pick up the pieces. I suppose if you want something done right, you should do it yourself? Then get this, Chisanu doesn’t give up, he manages to escape the hospital (with the excuse that he must let Korya know how much he is willing to risk himself for his love) and even discovers the same spot in which Khun Id was at. Ok, we have two men who are smarter than the police force.

The idiot Nop apparently believes everything Payia tells him. As they are waiting for the mother-daughter to have their moment, Nop asks Payia what the next steps are. Apparently, Payia would call the cops on Nop- since he has so many cases against him anyway- and she would tell the cops that she and Korya came to rescue Khun Dara from the kidnap, but unfortunately neither Korya or Khun Dara survived. By that time, Nop would have plenty of time to run away. Nop is pissed at first but concedes to her plan. He should know by now that Payia only cares about number one, and that’s her.

So Korya and Khun Dara devise a plan to escape. They contrive for Khun Dara to fake (or maybe she’s really hurting) that her heart condition is recurring. Payia doesn’t want Khun Dara to die so she orders Nop to buy the medication. This allows Khun Id and Chisanu to track Nop and follow him to the abandoned mansion. While Khun Dara and Korya is alone with Payia, they decide to escape. Ah, but it’s not meant to be because Nop comes back in time and takes the gun away from Korya. Payia and Korya go neck to neck and fight. Now this method of acquiring Korya’s memory back lacks a little imagination. You remember how Korya was hit on the head and lost her memory, right? Well, apparently she just requires another hit on the head to gain her memory back. She should have done that a long time ago, lol. So Payia swings the branch at her and Korya falls to the ground, and her head hit the ground with a thud. Suddenly, it’s like magic, her memory starts flooding back.

So does her confidence, in spades. She approaches Payia fearlessly and recites the events of the night the car flipped over, the fateful night that changed everything. The interesting thing that Payia says though, is that the reason why she had to kill everyone and went all ape crazy is because her “mom” while she was her mom did not care or love her unconditionally. She finally realizes that their bond was never that true, not until she sees how Khun Dara is willing to do anything for Korya, which pisses her off to no end. That is a little contrary to her character, after everything that she’s been through, after all of the deaths she committed, but in a way, it offers a little depth to her character- if not a little too late.

Anyway, so Khun Id gets to play hero and rescues the ladies. I love that Korya has so much faith in him, she tells her mom that Khun Id will find a way to help them. Aw. Chisanu gets shot by Payia, who manages to get away (well of course, it’s not the ending yet!) Nop dies by a gunshot from Id and then the cops finish him off. 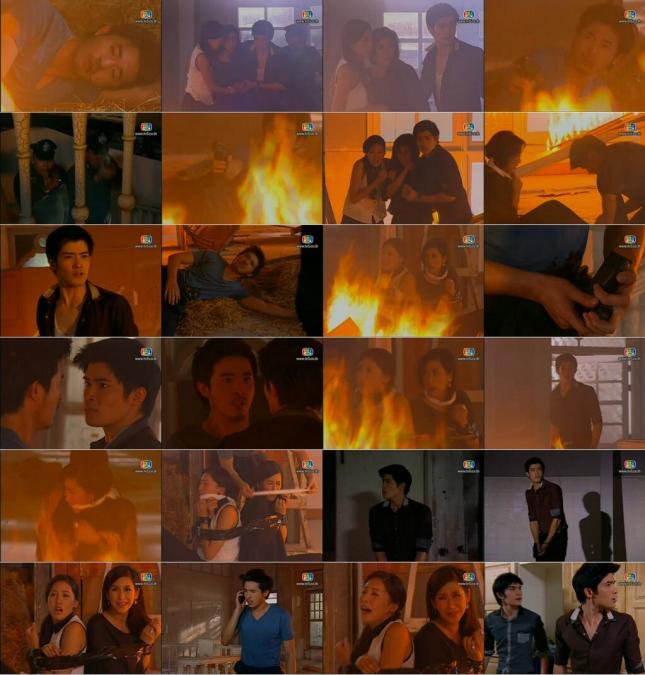 Now finally, my favorite part. Khun Id thinks that all is well. He rescues his ladies, take them home and watch them reunite oh so sweetly. But he recalls briefly the scene when Chisanu is in a stretcher and that Korya had taken his hand, and didn’t like to see that. But he’s about to hear something so much more worse, perhaps his worse nightmare.

“Thank you for everything,” Korya says as she walks him back.

“It’s nothing,” he replies, “People who are an item should help each other,” oh gosh, this is not going to end well for you. “Right?” he asks back. He asks looking at her with a smile.

“Liar,” Korya says brusquely and confronts him with the truth, “I’ve never been your girlfriend, I actually hate your face from the moment you hit my bike with your car!” She pokes at his chest – he’s looking shocked and surprised.

“If you weren’t mean by kicking us out of the nunnery, I wouldn’t be traveling to Bangkok! I wouldn’t have encountered all of these horrible things!” she exclaims and turns away.

He stops her and holds both of her arms, “Your memory is back, isn’t it?”

She smiles widely at him, “Yes I remember now, I remember everything- who I am, who you are and who Chisanupong is..”

Korya still smiles but Khun Id is visably upset and he turns away. Stung. His worse nightmare, that perhaps she will remember how much she loves Chisanupong. Yet he doesn’t know that as he turns his back, Korya smiles at him.

He refuses to eat the medicine from Taeng, but the moment he sees Korya, his face lights up. “You’re just as bad as before,” she comments, taking over the nursing from Taeng.

Taeng looks uncomfortably between the two and leaves, hurt.

“If you don’t eat,” Korya warns Chisanu, “I will force this down your throat.”

“Why? I don’t appear to be your best friend, Chisanu?”

“Yes,” Korya confirms, “my memory is back.” She takes his hands, “I remember everything now.”

“I’m so happy!” he exclaims, taking her hands too. They beam at each other.

“So you remember everything?” he asks.

“Yes, from the first moment to now,” she replies.

“Then you remember how much we used to love each other?”

“I do remember that,” then she releases his hands. “- that you are my friend. A friend that I love the most.”

“The feelings I have for you then has not changed today. You are my very best friend, Chisanu,” Korya says.

Chisanu waits a beat. “So just friends then?” he asks.

“Not just friends- but a friend that I love the most, is that ok?” she questions and feeds him.

I love this new Korya (or old one haha.) She’s going to give Id a run for his money. Shows him a thing or two about arrogance. She just doesn’t know that underneath all of that arrogance and confidence, is a man who is so afraid of losing her. Can’t wait to see how this pans out.

Episode 15 preview has Id revealing to his father that Sukkuna has been cheating on him. Payia looks to be like she is getting her karma but unfortunately, she later manages to kidnap Korya again.

Perhaps you’re better able to tell me if Ep 15 will be the end, or perhaps 16? Ha, I don’t know anymore!

One can almost watch the entire episode without having the need to understand what they are saying. I just want to say, get on with it already! If it’s any consolation, Toomtam still looks darn tempting.